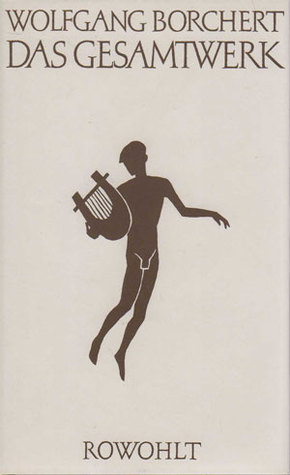 When Wolfgang Borchert died in 1947 at the age of 26, he had seen it all. He had been forced into the Hitler Youth (like so many others), then “released” from it, arrested, went to war in Russia, was imprisoned, there wasn't anything he hadn't seen or done.

He fled and came back home to post-war Hamburg where he started to write plays and short stories. His health was severely damaged and even though he was sent to Switzerland to recuperate, he died in a sanatorium there.

His work is one of the most important in the so called "Rubble literature" (Trümmerliteratur) of post-war Germany. One can only imagine what he would have been able to create, had he been allowed to live longer. His most important and best known piece is "Draußen vor der Tür" (The Man Outside).

I had to read Borchert in school, it is still a must in the German curriculum. Even though I am not a big fan of short stories, I love his work. Borchert is one of my favourite authors. I reread all his works a while ago and love them still as much as when I was a teenager. Among my favourite stories are "An diesem Dienstag" (On this Tuesday), "Nachts schlafen die Ratten doch" (The rats do sleep nights) and "Das Brot" (The Bread).

About the author:
"German author and playwright whose work was affected by his experience of dictatorship and his service in the Wehrmacht during the Second World War. His work is among the best examples of the Trümmerliteratur movement in post-World War II Germany. His most famous work is the drama "Draußen vor der Tür (The Man Outside)", which he wrote in the first days after World War II. In his works he never makes compromises in questions of humanity and humanism. He is one of the most popular authors of the German postwar period, and today his work is often read in German schools."
Posted by Marianne at 17:36