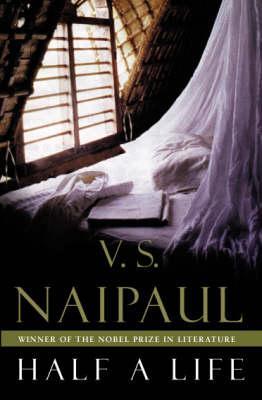 After reading "A House for Mr. Biswas", I just had to read more by this wonderful writer. This novel takes place in a lot of different parts of this world, India, Africa, Europe.

A privileged son leaves his home and goes abroad to live a poor life. An interesting take on life in different settings. A lot of information about post-independence India, Africa and Europe during that time, a comparison, a view about completely different cultures and lifestyles. Brilliant read, often called the author's best novel.

From the back cover:
"In a narrative that moves with dreamlike swiftness from India to England to Africa, Nobel Laureate V. S. Naipaul has produced his finest novel to date, a bleakly resonant study of the fraudulent bargains that make up an identity.

The son of a Brahmin ascetic and his lower-caste wife, Willie Chandran grows up sensing the hollowness at the core of his father's self-denial and vowing to live more authentically. That search takes him to the immigrant and literary bohemias of 1950s London, to a facile and unsatisfying career as a writer, and at last to a decaying Portugese colony in East Africa, where he finds a happiness he will then be compelled to betray. Brilliantly orchestrated, at once elegiac and devastating in its portraits of colonial grandeur and pretension, Half a Life represents the pinnacle of Naipaul's career."

Apparently, there is a sequel called "Magic Seeds" which I still have to read. I did read "A Bend in the River" in the meantime and really loved it, as well.

V.S. Naipaul received the Nobel Prize for Literature in 2001 "for having united perceptive narrative and incorruptible scrutiny in works that compel us to see the presence of suppressed histories".

I contribute to this page: Read the Nobels and you can find all my blogs about Nobel Prize winning authors and their books here.
Posted by Marianne at 13:05