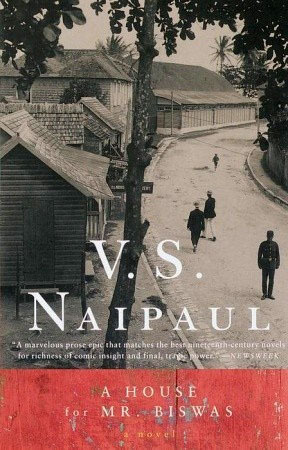 "'A House for Mr. Biswas' portrays through a series of homes he had and fairly brief life of a poor Indian journalist turned civil servant in Port of Spain, Trinidad, in the years before and after World War II.”

I love V.S. Naipaul. He is a wonderful writer. Not only does he tell us about a life we would never be able to look into, but he does it in such an excellent way.

A man has a dream and he works for it. Not always easy. A lot of struggles. The more he tries to achieve his goals, the further away he seems to get.

A story about disappointments in life and shattered dreams, written in an exquisite way. I loved this book.

Apparently an novel with a large autobiographical background. The main character, Mr. Biswas who is based on the author's own father, is not a very likeable character, he is conceited, thinks very highly of himself and not a lot of others. Yet, with of V.S. Naipaul's wonderful use of language, the story is as beautiful as if he was talking about a beautiful and lovely princess. And even though the protagonist is not sympathetic, we can only feel sorry for those born into a certain life who have to follow the path described to them long before they were even here on earth. It does make you wonder, though, how good the relationship between V.S. Naipaul and his father was.

When following Mr. Biswas, we get an insight into the colonialism and the struggle of the natives to get out of it. We also live with the family and can get to know their day-to-day life and how a huge amount of people try to get on with each other in a crowded space.

A very complex story with a lot of subplots and minor characters that add to the fullness of this tale. It will become a true classic.

From the back cover:
"The early masterpiece of V. S. Naipaul’s brilliant career, 'A House for Mr. Biswas' is an unforgettable story inspired by Naipaul's father that has been hailed as one of the twentieth century's finest novels.

In his forty-six short years, Mr. Mohun Biswas has been fighting against destiny to achieve some semblance of independence, only to face a lifetime of calamity. Shuttled from one residence to another after the drowning death of his father, for which he is inadvertently responsible, Mr. Biswas yearns for a place he can call home. But when he marries into the domineering Tulsi family on whom he indignantly becomes dependent, Mr. Biswas embarks on an arduous–and endless–struggle to weaken their hold over him and purchase a house of his own. A heartrending, dark comedy of manners, 'A House for Mr. Biswas' masterfully evokes a man’s quest for autonomy against an emblematic post-colonial canvas."

I have also read "Half a Life" and "A Bend in the River" which I liked just as well.

V.S. Naipaul received the Nobel Prize for Literature in 2001 "for having united perceptive narrative and incorruptible scrutiny in works that compel us to see the presence of suppressed histories".

I contribute to this page: Read the Nobels and you can find all my blogs about Nobel Prize winning authors and their books here.
Posted by Marianne at 13:05