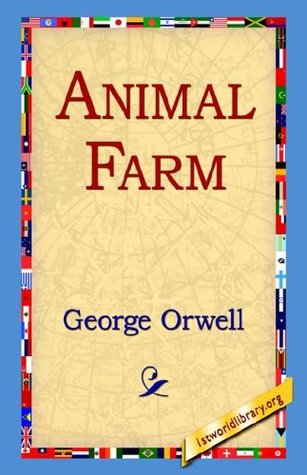 "All animals are equal but some animals are more equal than others." I think this must be one of the most popular quotes ever. And the most truthful.

Everyone knows "Animal Farm", if you haven't read it, then you have heard about it, if not, a very quick recap: The animals on Manor Farm start a revolution and chase the farmer away and take control. They start very democratic and socialistic but in the end the pigs get more and more like the humans and exploit the other animals.

Orwell was against Stalin and his policies, so this is a very political book, disguised as a fairy story. What can I say? I love it!!!

"Mr. Jones, of the Manor Farm, had locked the henhouses for the night, but was too drunk to remember to shut the pop-holes. With the ring of light from his lantern dancing from side to side, he lurched across the yard, kicked off his boots at the back door, drew himself a last glass of beer from the barrel in the scullery, and made his way up to bed, where Mrs. Jones was already snoring. As soon as the light in the bedroom went out there was a stirring and a fluttering all through the farm buildings. Word had gone round during the day that old Major, the prize Middle White boar, had had a strange dream on the previous night and wished to communicate it to the other animals. It had been agreed that they should all meet in the big barn as soon as Mr. Jones was safely out of the way. exhibited was Willingdon Beauty) was so highly regarded on the farm that everyone was quite ready to lose an hour's sleep in order to hear what he had to say."

I also recommend "Nineteen Eighty Four".
Posted by Marianne at 16:34