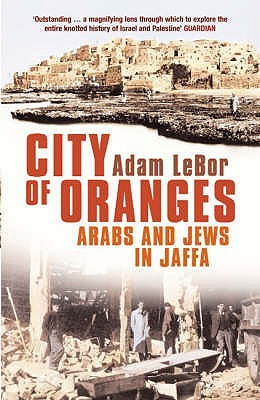 LeBor, Adam "City of Oranges. An Intimate History of Arabs and Jews in Jaffa" - 2006

Israel and its history was always of great interest to me, I can't remember how long, I grew up with it. I have visited this very historical and tormented country and therefore couldn't help but read this book. It's great! I had been to Jaffa and therefore could picture a lot of the descriptions in the book. But even if you haven't been there, I'm sure you would enjoy this book. The author describes every different ethnic people living in Israel and has a deep understanding for their problems.

To give you a little flavor from the conversation, here are some of the topics/terms that came up:
•    What's the solution?
•    Hague, Palestine's status in the U.N. and the voting results by nation
•    51st State (USA)
•    U.S. churches that pray for Israel
•    Yasser Arafat
•    People who believe what they want to believe because they are not sure what to believe?
•    Arrogant, defensive attitude (Zionists / some people in Israel)
•    More of a documentary than a book club read, not a fan of the writing
•    Good journalist (Adam LeBor is Jewish), unbiased
•    British and French hands in Israel
•    Demonstrations yesterday
•    Tough read, back and forth of retaliations
•    Guilt and reparations
•    Colonists of Hebron
•    Too many characters, all middle class, would have been better if characters were made more interesting/developed
•    Funds requested from Germany for care of aging Holocaust survivors in Israel
•    Natives in Canada
•    Orthodox Jews, Muslim Brotherhood
•    Intifada
•    Some don't want peace
•    Haves vs. Have-nots
•    Ireland
•    Arabs concede in the book that they have a more comfortable life in Israel than in many Arab nations

"The ancient city of Jaffa was for centuries the main port of the eastern Mediterranean, a city of traders, merchants, teachers and administrators, home to Muslims, Christians and Jews, while the produce of its orange groves was famed throughout the world. It was in Jaffa that Peter the apostle was said to have raised Dorcas from the dead, and where Richard the Lionheart defeated Saladin. It was here, too, that Napoleon stormed ashore in 1799, while from 1920 the British administered the city under the Mandate. It is in 1920 that City of Oranges begins.

Through the stories of six families - three Arab and three Jewish - City of Oranges illuminates the underlying complexity of modern Israel, telling the story from the Ashkenazi as well as from the very different Sephardic point of view, and from Christian Arab as well as from the Muslim perspective. Through the eyes of these families we understand how the founding of the state of Israel was simultaneously a moment of jubilation for the Jews, and a disaster - the Naqba - for the 100,000 Arabs who fled Jaffa in 1948, most of them never to return.

Adam LeBor goes beyond the daily news and political rhetoric to break down the media stereotypes and recount a moving story through the prism of Jaffa and its inhabitants. From the Christian Arab car-dealer, the Jewish coffee-and-spice merchant, the Arab baker who made bread for the whole community and the Palestinian exile who tried to bring modern business methods to the Arafat era, to the Jewish schoolgirl who befriended an Arab drug dealer, we see people striving to make a life in a country born of conflict." (You will find more information on Adam LeBor's homepage.)

We discussed this in our book club in January 2013.

Another interesting book on this subject:
Tolan, Sandy "The Lemon Tree: An Arab, a Jew, and the Heart of the Middle East"
Posted by Marianne at 16:45