Mitchell, Margaret "Gone With the Wind" 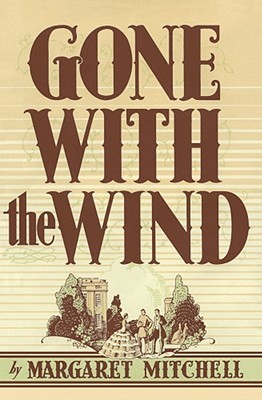 I have read this book ages ago - at around the same time I watched it in the cinema for the first time. I love this story, book or movie, both are great. I must have watched this movie at least a dozen times in the cinema (in the pre-video-time). It was also the first movie I ever watched in English. I have always wanted to re-read the book, maybe now would be the time.

I reread this book recently and must say, I enjoyed it as much as I did as a teenager, even though my views on certain parts have changed. That might be because in my youth certain values from the Deep South were still around in smaller villages. I have left that sort of life but I am almost sure that they have changed, as well.

I did enjoy reading about the "life" of a war, the anticipation, how everyone wants this to happen for some reason or another, how they plunged into the fights and how they returned defeated and hopeless. This is what war does to any people. Rhett Butler says on page 227 of my edition: "If the people who started wars didn't make them sacred, who would be foolish enough to fight? But, no matter what rallying cries the orators give to the idiots who fight, no matter what noble purposes they assign to wars, there is never but one reason for a war. And that is money. All wars are in reality money squabbles. But so few people ever realize it."

I admire Rhett more today than I did years ago. The way he put up with Scarlett and her moods. But I also understand Scarlett better and I can see the attraction between the two.

Another very important part of the book is the love of the land. On page 389, when Scarlett returns home from Atlanta, she wonders "... Was Tara still standing? Or was Tara also gone with the wind which had swept through Georgia?" I am not surprised this was the sentence they used as the title of the book.
And then the determination, the will Scarlett showed where most people feel this is the end.

This is even more powerful than the always (falsely) quoted last sentence of the movie: "My dear, I don't give a damn.". The correct ending of both the movie and the book is, of course "After all, tomorrow is another day." Scarlett lives by this philosophy but it's not always to her advantage.

I have not read and refuse to read the follow-up "Scarlett" by Alexandra Ripley. I believe the story should have been written by Margaret Mitchell or not at all (after all, she invented the characters). I don't like to read sequels not written by the original author. I might, however, consider reading "Rhett Butler's People" by Donald McCaig because I wouldn't mind reading what Rhett Butler's family is going through at the same time as "Gone with the Wind" is taking place.

Margaret Mitchell received the Pulitzer Prize for "Gone With the Wind" in 1937.

From the back cover:
"Set against the dramatic backdrop of the American Civil War, Margaret Mitchell's magnificent historical epic is an unforgettable tale of love and loss, of a nation mortally divided and a people forever changed. Above all, it is the story of beautiful, ruthless Scarlett O'Hara and the dashing soldier of fortune, Rhett Butler. "
Posted by Marianne at 15:05