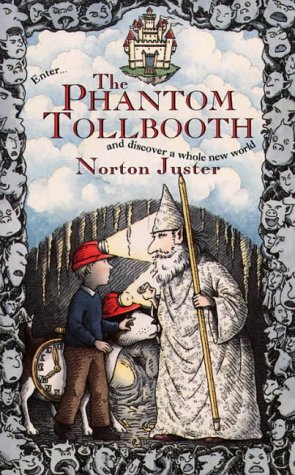 This children's novel was recommended by a good friend who has a similar taste in books.

I probably would have enjoyed it more if I had read it as I child, or with my children. Now, I feel it came at least 20 years too late.

Partly quite funny, and even though I'm usually more into words and enjoyed the games they play with the language, I liked the world of numbers best.

But on the whole, it is just too much, too overdone, too fantasy-like. Not my cup of tea.

"When Milo finds an enormous package in his bedroom, he’s delighted to have something to relieve his boredom with school. And when he opens it to find – as the label states – One Genuine Turnpike Tollbooth, he gets right into his pedal car and sets off through the Tollbooth and away on a magical journey!

Milo’s extraordinary voyage takes him into such places as the Land of Expectation, the Doldrums, the Mountains of Ignorance and the Castle in the Air. He meets the weirdest and most unexpected characters (such as Tock, the watchdog, the Gelatinous Giant, and the Threadbare Excuse, who mumbles the same thing over and over again), and, once home, can hardly wait to try out the Tollbooth again. But will it be still there when he gets back from school?"
Posted by Marianne at 16:45