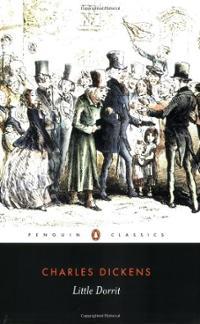 One day I hope to have read all books by Charles Dickens. This was the next step. And I am happy I read it. What a beautiful book, what a beautiful story, told in the typical Dickens manner where he describes even the tiniest detail. I love it. Makes you feel like you were there.

Apparently, Dickens' father spent some years in the Marshalsea prison which he used as the main setting for this novel. I think this fact and that he was forced to work for the family at a very young age, has made a huge impact on the author and we can all enjoy the outcome of that, many great books. There are certainly a lot of his own experiences in them.

We meet Arthur Clennam and Amy Dorrit, a devoted daughter who supports her father in prison. But these two are by no means the only major characters in the book, there are many different sub-plots and the story reaches from China via France to England,then Italy and back to England. Quite a distance for those times.

I do like that there is so much in Dickens' novels. He describes a location just as well as an emotion, he understands a lot about psychology and you can find it in all of his books.

This will certainly belong to one of my favourite books by Charles Dickens - if I will ever be able to sort some out as my non-favourites. Read it, even though it contains about a thousand pages, you will not regret it. I promise.

From the back cover: "When Arthur Clennam returns to England after many years abroad, he takes a kindly interest in Amy Dorrit, his mother's seamstress, and in the affairs of Amy's father, William Dorrit, a man of shabby grandeur, long imprisoned for debt in the Marshalsea. As Arthur soon discovers, the dark shadow of the prison stretches far beyond its walls to affect the lives of many, from the kindly Mr. Pancks, the reluctant rent-collector of Bleeding Heart Yard, and the tipsily garrulous Flora Finching, to Merdle, an unscrupulous financier, and the bureaucratic Barnacles in the Circumlocution Office. A masterly evocation of the state and psychology of imprisonment, Little Dorrit is one of the supreme works of Dickens's maturity."
Posted by Marianne at 17:27