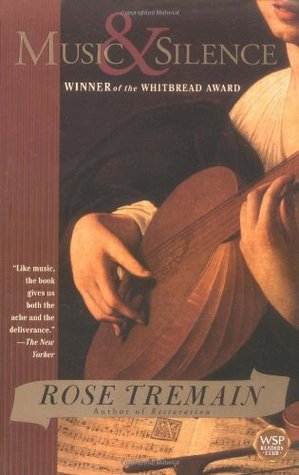 This can almost be called a saga, so much is in this story of  the Danish court in the 17th century. What I love most about historical novels is the background, and I always read more about that afterwards if I didn't know anything, yet. I never take any part of a story like that for granted until I read about it in a reliable source.

In this case, I learned facts about the Danish court and king Christian IV that I had never heard of before. Very interesting.

The novel itself is quite catching, a lot of (partly fictional) side characters add to the tension. The author uses great language, her sentences are almost poetic, her story flows well, she alternates between different characters, even different storytellers and different forms of writing, letters and diary entries are added to the story itself.

Of course, I also love that this is a rather long story.

"In the year 1629, a young English lutenist named Peter Claire arrives at the Danish Court to join King Christian IV's Royal Orchestra. From the moment when he realizes that the musicians perform in a freezing cellar underneath the royal apartments, Peter Claire understands that he's come to a place where the opposing states of light and dark, good and evil are waging war to the death.

Designated the King's 'Angel' because of his good looks, he finds himself falling in love with the young woman who is the companion of the King's adulterous and estranged wife, Kirsten. With his loyalties fatally divided between duty and passion, how can Peter Claire find the path that will realize his hopes and save his soul?"

Some of my favourite quotes:
p. 104
"... if we discover, ..., that our love is not reciprocated, we should cease to yearn for this reciprocation, but strive instead to dismantle the love in our hearts. And then in time the confusion will be unravelled and on both sides there will be quietness."
p. 121
"German ... the way the verb withholds itself from its own completion until the last moment in almost every sentence, thus imparting to all linguistic constructions a hanging thread of mystery." I love it. It's soooo true.
Posted by Marianne at 16:55