Obama, Barack "The Audacity of Hope" 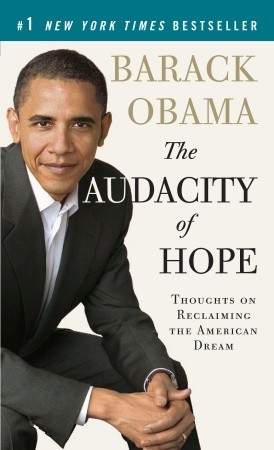 Obama, Barack "The Audacity of Hope: Thoughts on Reclaiming the American Dream" - 2006

I think definitely since I reviewed "Dreams from My Father" (or Hilary Clinton's "Living History"). everybody knows what party I would support if I lived in the USA. I loved that book and wanted to know more about Barack Obama, so I read his next one

I am often shocked when I hear some people talk about this president as if he was evil and only wanted the worst for his country when he has done so much for them and tries to help everyone. I also don't understand how people who have to work hard for their money don't support him and his party in their effort to cut tax reliefs for the rich people and make the life of the "little man" a little easier. Who does not want health insurance??? I live in a country where it has been the norm to have health insurance and help when you get unemployed. We believe in nobody gets left behind. Maybe that's why Barack Obama has so many supporters over here, he has the same goals as we do.

Anyway, back to the book. Whilst in "Dreams from My Father", the author talks about his childhood and first steps into adulthood, he now gives an account of his first steps as a politician. I found it very interesting to look behind the scenes with someone who has been a Senator, who knows all the ins and outs and the pros and cons of politics. Very interesting, I think everyone should read this book.

He quotes Daniel Patrick Moynihan: "Everyone is entitled to his own opinion, but not to his own facts." I think we all should take that to heart.

"The Audacity of Hope is Barack Obama's call for a new kind of politics - a politics that builds upon those shared understandings that pull us together as Americans. Lucid in his vision of America's place in the world, refreshingly candid about his family life and his time in the Senate, Obama here sets out his political convictions and inspires us to trust in the dogged optimism that has long defined us and that is our best hope going forward."

Barack Obama received the Nobel Prize for Peace in 2009 "for his extraordinary efforts to strengthen international diplomacy and cooperation between peoples."

I contribute to this page: Read the Nobels and you can find all my blogs about Nobel Prize winning authors and their books here.
Posted by Marianne at 14:05