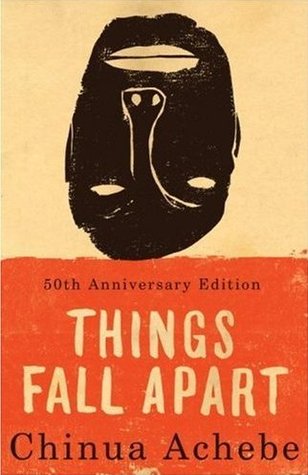 A story about Nigeria just after the arrival of the first European colonists in the late nineteenth century.

I haven't read many African novels but this is by far the best one to portray African culture and what Europeans have done to them through their colonies. Okonkwo and his village live a perfectly good life with their tribes, tradition, religion, work and family life. And then the European missionaries arrive and tell them that everything they've done so far is wrong and force them into changes that none of them really wants.

We must not like Okonkwo in order to understand that colonialism was just wrong. This is no way to help another nation, another culture, it's just a way to destroy it and the lives of those that live it.

A great book that I would recommend to everyone who is interested in other cultures, even or especially if they don't exist like this anymore.

This is the first story of the author's "African Trilogy". "No longer at Ease" and "Arrow of God" are the follow-up novels.

"Things Fall Apart tells two intertwining stories, both centering on Okonkwo, a 'strong man' of an Ibo village in Nigeria. The first, a powerful fable of the immemorial conflict between the individual and society, traces Okonkwo’s fall from grace with the tribal world. The second, as modern as the first is ancient, concerns the clash of cultures and the destruction of Okonkwo's world with the arrival of aggressive European missionaries.

These perfectly harmonized twin dramas are informed by an awareness capable of encompassing at once the life of nature, human history, and the mysterious compulsions of the soul."

Chinua Achebe received the Peace Prize of the German Book Trade (Friedenspreis) in 2002.
Posted by Marianne at 14:51