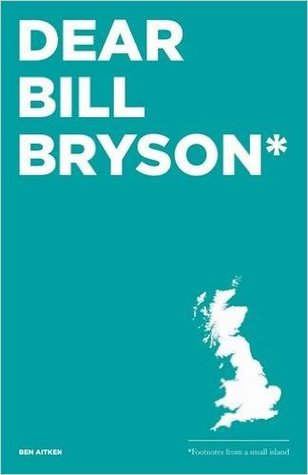 If you know me even a little, you know how much I love Bill Bryson's book. And therefore, I just had to read Ben Aitken's homage. He travelled the same route as Bill Bryson did in 1995 (as described in his book "Notes from a Small Island"), only about twenty years later. Even though Bill Bryson did a second tour ("The Road to Little Dribbling: More Notes from a Small Island") through the UK and a lot has changed in the meantime, it was a pleasure to accompany this author in his footsteps through the UK.

Sometimes he was a tad too sceptical about what Bill Bryson had done or said but it was still lovely to reminisce with the author. Some of his criticism is probably a generation question, I bet he sees it different in twenty years.

Not as funny as Bill Bryson but still quite worth reading.

"'Long story short, I've decided to retrace your steps. Why? Because I'm bored. Take it from me, there's only so many tacos a guy can serve before he wants to put a pint of salsa down his windpipe.'

An irreverent homage to the '95 travel classic Notes from a Small Island, wherein Ben Aitken retraces Bill Bryson’s journey as precisely as possible - same hotels, same plates of food, same amount of time in the bath - before finishing outside his house on Christmas Eve.

Ben Aitken was born under Thatcher, grew to 6ft then stopped, and is an Aquarius. He followed Bill Bryson around the UK for Dear Bill Bryson: Footnotes from a Small Island (2015).

'It would be wrong to view this book as just a highly accomplished homage to a personal hero. Aitken's politics, as much as his humour, are firmly in the spotlight, and Dear Bill Bryson achieves more than its title (possibly even its author) intended.' Manchester Review"

I love all of Bill Bryson’s books. Find a link to my reviews here.
Posted by Marianne at 17:29