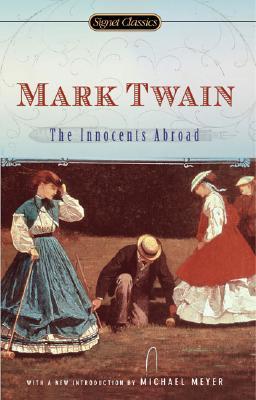 This was one of the most boring books I have read in a long time. A lot of times I didn't know whether to laugh or cry, whether to consider this sarcastic or just plain stupid, arrogant and ignorant. I know Mark Twain was neither but his travel book seems like a satire about stupid, arrogant, ignorant and uneducated Americans who have nothing better to do than to look down upon any European who doesn't speak English perfectly, who doesn't have the same standard of living as they have ... I don't want to say these people don't exist in other countries, but this book has been written by an American about Americans abroad.

I was expecting a good travel book about a time long gone. I read a racist diatribe, a condemning monologue, a criticizing tirade instead.

Maybe this book used to be very funny, maybe there are books that don't stand the test of time, that are outdated after a certain timeframe. I think this is one of them.

I couldn't laugh about most of the stories he told, I found them often rude and condescending, maybe that's what an American thought about the world in the 19th century. Let's hope they don't do that anymore.

This is the story about close-minded people who go abroad only to compare everything to their country back home and discover, of course, that everything is better  at home. Why leave and try to explore the world if all you want to find is fault about other countries.

No, this book is not funny, not witty.

Why did I finish reading this? I never gave up hope that there could be something interesting around the corner, that there was something in the next country he would like. Unfortunately, he never did.

If you want to read a funny travel book, I recommend Bill Bryson who also happens to be American but with a much wider view of this world, a much bigger heart and real humour and wit.

From the back cover: "One of the most famous travel books ever written by an American, The Innocents Abroad is Mark Twain’s irreverent and incisive commentary on nineteenth century Americans encountering the Old World. Come along for the ride as Twain and his unsuspecting travel companions visit the Azores, Tangiers, Paris, Rome, the Vatican, Genoa, Gibraltar, Odessa, Constantinople, Cairo, the Holy Land and other locales  renowned in history. No person or place is safe from Twain’s sharp wit as it impales both the conservative and the liberal, the Old World and the New. He uses these contrasts to 'find out who we as Americans are,' notes Leslie A. Fiedler. But his travelogue demonstrates that, in our attempt to understand ourselves, we must first find out what we are not."
Posted by Marianne at 15:22