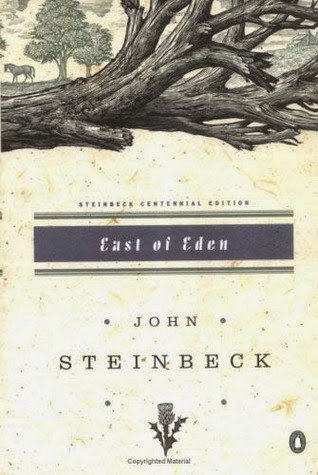 I have watched the movie ages ago and always wanted to read the book. I'm glad I did. Steinbeck is a wonderful author, his writing is almost poetry, his thoughts philosophical and, yet, his stories are so alive. You have the feeling you're there with the characters, you laugh and cry with them.

Steinbeck talks about problems as old as mankind, he retells the story of Cain and Abel, only here they are called Caleb and Aaron (the father is still Adam, though), and they live in his native California.

An excellent report about growing up, growing in different directions, about good and evil, young and old, a very moving story, so many lives that you fear and hope with.

In the meantime, we have discussed this book in our international book club. We had a great discussion, everyone seemed to be getting something out of it, even if we disliked the characters.

Some of our comments:
"I loved written style. Breathtaking, descriptive power, opening page. I usually go fast over descriptive things of nature but not this time. I really like his writing, like the many details. Just looking at the first chapter, you can picture yourself there, smell the smell, feel the wind, the characters are very structured. Even though I don't like sad books, I find this fascinating. He is a good writer, carries you along.
He tried to document what it was like in the Salinas Valley at the time. It reads like a Western.
Why haven't I read this before?
Biblical Story: A rabbinical-like exegesis of free will. It stopped the characters from developing.
I got wary about his insistence of the biblical story, I'm not dumb, got tired of him repeating it all the time
I didn't like the good and evil, the black and white.
Did he make the biblical references on purpose?
I thought this was a retelling of the bible, so the characters had to act the way they acted.
Characters: The author constrains his characters that they have to act in a certain way.
Hated Adam. He got off too easily.
Cal the anyone who could back out because he struggled with himself.
I hated most of the characters, the ones I liked had some backbone.
Heavy, pigeon-holed characters, Steinbeck put them in a box.
Loved the relationship between Lee and Samuel.
Kate is based on his ex-wife who wouldn't let him see his two sons. Maybe that's why she was so negative.
Loved Lee, stories repeated themselves.
Abra was interesting, I always asked "why did you pick the loser brother, why did you wait?"
I was repelled by the characters you keep turning the pages. Samuel was too good to be true (the Hamiltons were modeled after Steinbeck's family), his kids were the only ones who did have a real chance to develop as they liked."

I can highly recommend this book.

We discussed this in our book club in September 2012.

From the back cover: "Set in the rich farmland of California’s Salinas Valley, this sprawling and often brutal novel follows the intertwined destinies of two families - the Trasks and the Hamiltons - whose generations helplessly reenact the fall of Adam and Eve and the poisonous rivalry of Cain and Abel. Here Steinbeck created some of his most memorable characters and explored his most enduring themes: the mystery of identity; the inexplicability of love; and the murderous consequences of love’s absence."

John Steinbeck received the Nobel Prize for Literature in 1962 "for his realistic and imaginative writings, combining as they do sympathetic humour and keen social perception".

I contribute to this page: Read the Nobels and you can find all my blogs about Nobel Prize winning authors and their books here.
Posted by Marianne at 00:00