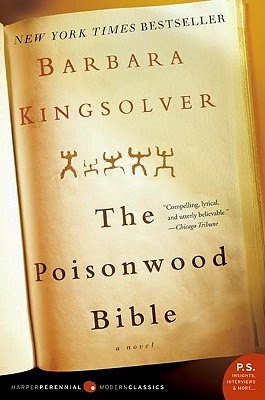 One of my favourite books ever. This story is told in diary form by the wife and four daughters of a preacher. He takes them to Africa where all five of them have different experiences and see the country with different perspectives. The father is quite abusive, not what you would expect a religious man to be (though one of my friends says she knows a guy exactly like him and that's why she doesn't like the novel).

This book doesn't just tell the story of a family and different women but also the history of the Belgian Congo and the differences of the cultures.

We discussed this in our book club in December 2001.

"The Poisonwood Bible tells the story of an American family in the Congo during a time of tremendous political and social upheaval. The story is told by the wife and four daughters of Nathan Price, a fierce evangelical Baptist who takes his family and mission to the Belgian Congo in 1959. They carry with them all they believe they will need from home, but soon find that all of it - from garden seeds to Scripture - is calamitously transformed on African soil. This tale of one family's tragic undoing and remarkable reconstruction, over the course of three decades in postcolonial Africa, is set against one of history's most dramatic political parables. The Poisonwood Bible dances between the darkly comic human failings and inspiring poetic justices of our times. In a compelling exploration of religion, conscience, imperialist arrogance, and the many paths to redemption, Barbara Kingsolver has written a novel of overwhelming power and passion."

I have read several other Kingsolver novels in the meantime and liked all of them, you can find my reviews here. Although this one is still my favourite next to "The Lacuna".

Barbara Kingsolver was a finalist for the Pulitzer Prize for "The Poisonwood Bible" in 1999.
Posted by Marianne at 17:40