Lewycka, Marina "A Short History of Tractors in Ukrainian" 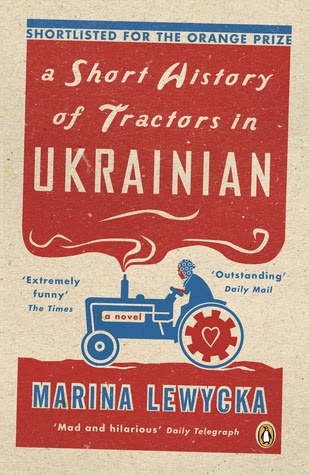 Lewycka, Marina "A Short History of Tractors in Ukrainian" - 2005

The story of two Ukrainian sisters, Nadezhda and Vera whose family found refuge in England.

I read this novel with my book club a couple of years ago. I thought there were a lot of topics in this story that you can talk about, immigration, sibling rivalry, generation conflict, Cold War,  jealousy, sociology. It was great having a few East European members in the meeting who could contribute their views.

This was an easy book, fast to read, informative, interesting, enjoyable, powerful. Didn’t think it was very funny, even the author was surprised about this description. She relates tractors to Ukrainian people.  Lots of references and historic value about life in the Eastern European countries before the fall of the wall. The characters were built-up very well, the use of the English language wonderful, the expatriation part was interesting for me being an expat, as well.

There are quite a few interesting characters in the book, the most interesting is probably the difference of the two sisters, one was born in peace, one in war, one is 10 years younger than the other. When discussing this with the book club, we came to the conclusion that sometimes it’s worth carrying on with a book, it might be a great read.

We discussed this in our book club in November 2006.

"Sisters Vera and Nadezhda must put aside feuding to save their engineer father from gold-digger Valentina. With her proclivity for satin underwear and boil-in-the-bag cuisine, she will stop at nothing in her pursuit of wealth. But the sisters' campaign to oust Valentina unearths secrets and sends them back to roots they'd much rather forget. "

I also enjoyed "Two Caravans"
Posted by Marianne at 17:35