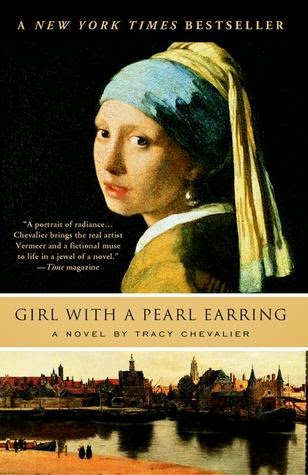 One of our first book club reads in the Netherlands. We chose this because of the "Dutch background", i.e. a painting of the Dutch artist Johannes Vermeer. The main character is 16 year old Griet from Delft, a maid in the house of the famous painter. She doesn't just become a good help, she also is the model for his famous picture "Girl with a Pearl Earring". Even though this is fiction and it is generally assumed that the girl in this painting is one of Vermeer's own daughters, the story still is very interesting. The author describes the way a painting is done, the politics behind it, the life in the 1600s both in poor and rich houses.

As expatriates in the Netherlands, this novel also brought us closer to one of this country's great geniuses. You can tell the author loves art and history. This is also one of the few books turned into a film where I didn't entirely dislike the movie, even though alterations were made.

We discussed this in our book club in November 2001. We also discussed "Remarkable Creatures" by the same author in October 2010.

From the back cover: "A brilliant historical novel on the corruption of innocence, using the famous painting by Vermeer as an inspiration.
Griet, the young daughter of a tilemaker in seventeeth century Holland, obtains her first job, as a servant in Vermeer’s household. Tracy Chevalier shows us through Griet’s eyes, the complicated family, the society of the small town of Delft, and life with an obsessive genius. Griet loves being drawn into his artistic life, and leaving her former drudgery, but the cost to her own survival may be high."

Find here the other books I read by this author.
Posted by Marianne at 20:00