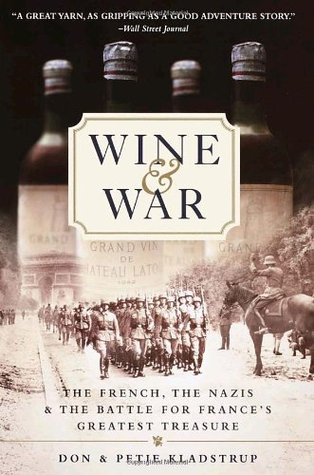 A book about World War II. Not unknown to me, I have read a lot of accounts of this terrible time in our history and usually am impressed by the way people can report about their lives or that of others during this period. Not this time, I'm afraid. It was chosen in our book club after having been suggested the second time in a row. I didn't vote for it last year, I didn't vote for it this year. I must have known why. I didn't care for it at all. I don't drink wine or any alcohol and compared to all the other atrocities that happened in that war, I couldn't care less about the disappearance of a couple of bottles of grape juice gone sour.

In addition to that, a lot of the subjects were only barely touched and very superficial, I didn't have the impression the authors had researched this topic very well. I also really disliked misspellings of French or German words, sorry, but that is just unacceptable in any book but especially a non-fiction one. As to the rest of the book, I learned more about this subject in my history lessons at school. One more thing, the authors don't even have a page on Wikipedia, not good news nowadays.

As to the book club, only one other person disliked the book. She thought it was a confusing, disjointed read, even though there were some interesting parts.

Most of the others really liked it. They said they learned that not all Germans were bad (true, that did come through). The whole idea about collaboration raised new questions with De Gaulle sitting in England in safety whilst Petain who did not want to be in the situation like in WWI had to make decisions in France. Of course, it's always easier to judge after the fact anyway. What would we have done?

One member mentioned that although it was not a fine piece of writing, it was interesting to read about different families throughout France and their situations. The description of the way of life and the importance of wine in the culture, how the production of wine has changed since the war, the Vichy, the restoration of the vineyards, which years were good/bad wine years and why, and the relationships between the Germans and the French (particularly the wine growers) were some of the more interesting bits.

So, most of our non-European members, especially when they were new to Europe, thought they learned a little from it. I guess, maybe the book should stay in North America. ;-)

Two quotes that caught my attention, one I like, the other one I didn't.

The letter Maurice wrote to his wife: "In my meditations, I find that nothing in life counts more than the happiness we can give others, the good that we can do. This is what we must teach our children, to think of others more than they think of themselves, for it is in this way they will find the most noble satisfaction of all.”"

"Although the war was awful for the world, it was the most beautiful moment of my life. I felt so full of patriotism." (That's why I don't like patriotism.)

"The remarkable untold story of France's courageous, clever vinters who protected and rescued the country's most treasured commodity from German plunder during World War II.

'To be a Frenchman means to fight for your country and its wine.' Claude Terrail, owner, Restaurant La Tour d'Argent

In 1940, France fell to the Nazis and almost immediately the German army began a campaign of pillaging one of the assets the French hold most dear: their wine. Like others in the French Resistance, winemakers mobilized to oppose their occupiers, but the tale of their extraordinary efforts has remained largely unknown-until now. This is the thrilling and harrowing story of the French wine producers who undertook ingenious, daring measures to save their cherished crops and bottles as the Germans closed in on them. Wine and War illuminates a compelling, little-known chapter of history, and stands as a tribute to extraordinary individuals who waged a battle that, in a very real way, saved the spirit of France."