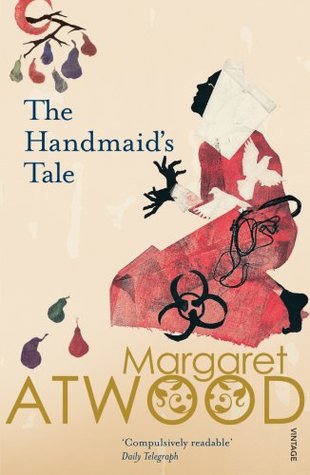 The Handmaid's Tale. A young lady called Offred tells us the story of Gilead, a country in the future, situated in a part of the present United States of America. Some catastrophes must have led to the state they are in, certainly some ecological disaster but also a revolution that caused the situation the people find themselves in, in a way they have a dictatorship in Mosaic times, the fertile young girls are sent to an older man whose wife can't have children, like Hagar who was the handmaid who was brought to Sarah's husband Abraham in order to bear him children. A lot of the parts of their lives are named after biblical characters or events.

We never get to know the name of the narrator, she just doesn't wish anyone to know it so she can believe there is another life, another place to go back to after all the horror in her life is over. I was wondering about the weird name the author gave to our protagonist until I came across the next ladies who all had a similar one. Offred = Of Fred. Sounds like a dream for guys that all the women carry their name, as if they were their possession ......

I don't even remember what I thought this book would be about, I certainly didn't think it might be a dystopian novel. I love those kind of stories better than the utopian ones, I cannot believe in a glorious future where everyone is peaceful and nobody has to suffer. Those stories that tell us about worlds gone wrong seem much more realistic.

The breeding part reminded me of Hitler's maternity institutions "Lebensborn" where he wanted to breed "pure" Aryans. Here, they just want to breed human creatures which seems to have become a problem. They also know what to do with people who do not comply or are otherwise useless. Their concentration camps are called "colonies" and people are sent there to work in contaminated regions where they will slowly, but very surely, die.

The biblical part reminded me more about what is going on in the United States now, interesting how Margaret Atwood could foresee that almost thirty years ago. Every law, every rule, everything has to confirm to the bible, anything that doesn't is evil. I can very well imagine that in the event of a major catastrophe, these kind of people will try to take over and a dictatorship not much unlike the one described could develop from this.

What I also really liked about the novel, even though it might be tempting and Offred does dream of a better world, she does not have any unrealistic hopes that this will ever happen. Nothing written with rose-tinted glasses.

Yes, a wonderful story, well told, changing between past and present, an interesting, nor foreseeable conclusion at the end, I loved the style. I loved the story. I will definitely read more by Margaret Atwood.

My favourite quote: "Maybe I'm crazy and this is some new kind of therapy. I wish it were true, then I could get better and this would go away."

I re-read this novel with my book club in 2018. See my new review here.

"The Republic of Gilead offers Offred only one function: to breed. If she deviates, she will, like dissenters, be hanged at the wall or sent out to die slowly of radiation sickness. But even a repressive state cannot obliterate desire – neither Offred's nor that of the two men on which her future hangs.
Brilliantly conceived and executed, this powerful evocation of twenty-first-century America gives full rein to Margaret Atwood's devastating irony, wit and astute perception."

Margaret Atwood was shortlisted for the Booker Prize for "The Handmaid's Tale" in 1986.

Margaret Atwood received the Peace Prize of the German Book Trade (Friedenspreis) in 2017.
Posted by Marianne at 15:11