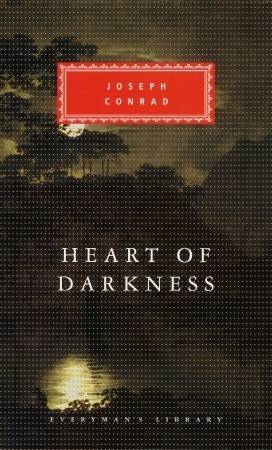 I found this book when reading Jane Smiley's "13 Ways of Looking at the Novel". It sounded interesting and I found it in the library the next time I went.

The author, a Polish novelist who wrote in English, wrote this story about an English captain who goes to Africa for an assignment. His ship is destroyed before he arrives and he is forced to travel into the dark continent. He conveys his thoughts about his experiences, his encounter with the inhabitants, both native and colonists.

Even though this is a novella, only 110 pages, so not very long, there is a lot of information crammed into the story, there is no way you can skip even one sentence and you will have lost the plot. He has a special kind of writing style, probably due to the fact that English is not his mother tongue and he still keeps the flow of his native language, as we probably all do somehow.

In any case, he gives us an interesting insight into colonisation, the impact it had on the people in Africa and also on the Europeans who went there. It is a highly interesting study about a part of history that still influences our lives today.

My favourite quote: "The conquest of the earth, which mostly means the taking it away from those who have a different complexion or slightly flatter noses than ourselves, is not a pretty thing when you look into it too much. What redeems it is the idea only. An idea at the back of it; not a sentimental pretence but an idea; and an unselfish belief in the idea - something you can set up, and bow down before, and offer a sacrifice to ..."

"In a novella which remains highly controversial to this day, Conrad explores the relations between Africa and Europe. On the surface, this is a horrifying tale of colonial exploitation. The narrator, Marlowe journeys on business deep into the heart of Africa. But there he encounters Kurtz, an idealist apparently crazed and depraved by his power over the natives, and the meeting prompts Marlowe to reflect on the darkness at the heart of all men. This short but complex and often ambiguous story, which has been the basis of several films and plays, continues to provoke interpretation and discussion.
Heart of Darkness grew out of a journey Joseph Conrad took up the Congo River; the verisimilitude that the great novelist thereby brought to his most famous tale everywhere enhances its dense and shattering power.

Apparently a sailor’s yarn, it is in fact a grim parody of the adventure story, in which the narrator, Marlow, travels deep into the heart of the Congo where he encounters the crazed idealist Kurtz and discovers that the relative values of the civilized and the primitive are not what they seem. Heart of Darkness is a model of economic storytelling, an indictment of the inner and outer turmoil caused by the European imperial misadventure, and a piercing account of the fragility of the human soul."
Posted by Marianne at 18:02