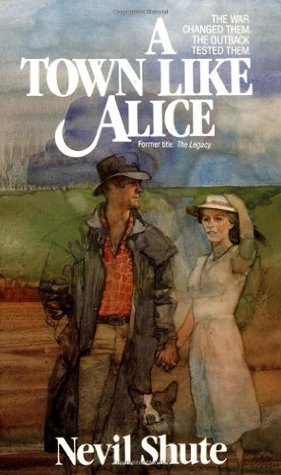 A young English woman works in Malaya (now Malaysia) during World War II and becomes a prisoner of war of the Japanese. Since they don't know where to put the group of women and children, they march them from one place to the next. A young Australian POW tries to help them and gets in trouble himself like that.

This is roughly the description of the book when you read the dust jacket. But that is only a small summary of a very small part of the story.

The author says that the march has taken place, not in Malaya but in Sumatra, and the women were not English but Dutch.

There are a lot of words, actions and thoughts that would definitely not be politically correct nowadays but if one considers when this novel was written, it is difficult to imagine it without those racist remarks.

I have thoroughly enjoyed reading this book that takes place in three continents during several different years. You get to know a lot of different people and areas and historical facts. You can imagine how people have started to live in the middle of nowhere and how small settlements have become big towns - or not.

"Nevil Shute's most beloved novel, a tale of love and war, follows its enterprising heroine from the Malayan jungle during World War II to the rugged Australian outback.

Jean Paget, a young Englishwoman living in Malaya, is captured by the invading Japanese and forced on a brutal seven-month death march with dozens of other women and children. A few years after the war, Jean is back in England, the nightmare behind her. However, an unexpected inheritance inspires her to return to Malaya to give something back to the villagers who saved her life. Jean's travels leads her to a desolate Australian outpost called Willstown, where she finds a challenge that will draw on all the resourcefulness and spirit that carried her through her war-time ordeals."
Posted by Marianne at 15:11