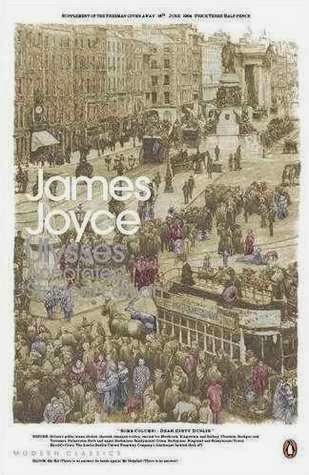 I loved the writing but the story was quite overwhelming despite reading "The Odyssey" first which everyone recommends and I would, too. Having a lot of explanations helped but if you generally don't like classics very much, I wouldn't start with this one.

As in Odyssey we have three parts: The Telemachiad, The Odyssey and The Nostos (Coming Home). In the Telemachiad, you can still follow the teacher Stephen Dedalus in his classroom and understand what he is trying to teach. Then all, of a sudden, the story changes and you encounter the protagonist of the story, Leopold Bloom. We are supposed to follow him around for the day. And follow we do but we don't always have an idea where this is guiding us. Starting at the breakfast table, we attend a funeral, go to a restaurant and end up in the middle of a play.

The best example why we need punctuation is the last paragraph where Bloom's wife Molly tells us her thoughts about her life in general and her marriage to Leopold in particular. Over forty pages and no punctuation. At all. No comma. No bull stop. No paragraph.  You can't even take a break.

However, the longer I distance myself from this novel, the more it makes sense and the bigger an impact does it have on me. I am glad I read it.

If you still are in doubt, consider this quote by William Faulkner:
"You should approach Joyce's Ulysses as the illiterate Baptist preacher approaches the Old Testament: with faith."

"For Joyce, literature 'is the eternal affirmation of the spirit of man'. Written between 1914 and 1921, Ulysses has survived bowdlerization, legal action and bitter controversy. An undisputed modernist classic, its ceaseless verbal inventiveness and astonishing wide-ranging allusions confirms its standing as an imperishable monument to the human condition. Declan Kiberd says in his introduction that Ulysses is 'an endlessly open book of utopian epiphanies. It holds a mirror up to the colonial capital that was Dublin on 16 June 1904, but it also offers redemptive glimpses of a future world which might be made over in terms of those utopian moments.'"
Posted by Marianne at 14:34