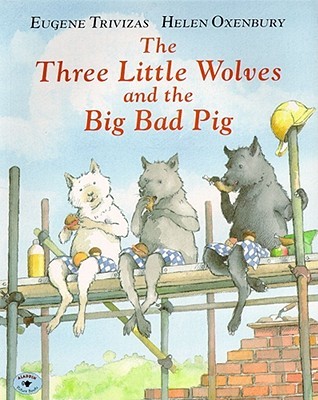 If you have read and enjoyed "The True Story of the Three Little Pigs" by Jon Scieszka with your kids, you definitely should try this book, as well.

As the title already suggests, the wolves are little and the pig is bad, so the whole story is just the opposite from the usual fairy tale. It shows kids how every story can have two sides and how you can understand every story differently.

The start is the same, the wolves want to buy a good house and the pig destroys them. Only, the wolves are clever and build their houses from bricks and concrete but the pig comes with a sledgehammer and dynamite. Only when they build a house form flowers and the pig smells the lovely smell, does he stop pursuing them.

We could also say, this is a "Make Love Not War" story for children, showing them that being nice to each other is better than fighting.

"When it comes time for the three little wolves to go out into the world and build themselves a house, their mother warns them to beware the big bad pig. But the little wolves' increasingly sturdy dwellings are no match for the persistent porker, who has more up his sleeve than huffing and puffing. It takes a chance encounter with a flamingo pushing a wheelbarrow full of flowers to provide a surprising and satisfying solution to the little wolves' housing crisis.

Eugene Trivizas's hilarious text and Helen Oxenbury's enchanting watercolors have made this delightfully skewed version of the traditional tale a contemporary classic."
Posted by Marianne at 15:59