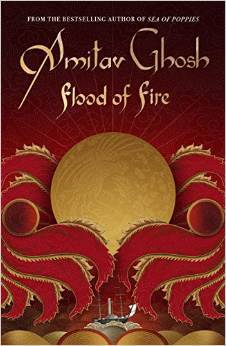 After reading "Sea of Poppies" two years ago, I was happy that the second book "River of Smoke" had already been published and I could just carry on reading. Then I was so disappointed to find that the third book had not even been written, yet.

Well, it was worth the wait. I probably should have reread the first two first and then carried on with the last one but I just couldn't wait. Characters, scenes, events did come back but I would have liked a little more reintroduction in some cases. I was also happy to see what happened to some of the characters from "Sea of Poppies" that were hardly or not at all mentioned in "River of Smoke" so that it all came back together again. I was not happy to learn that the author abandoned the thought of carrying on further with the story as he had intended after the second book. What a shame. I do hope he will write more, though, because I do love his style which I already admired in "The Glass Palace".

Just  a fantastic read. Mesmerizing, captivating. So much more history of a part of the world I don't know much about. I don't think we went into much detail in our lessons about the opium war because I certainly didn't remember that but I know a lot about it today.

If you are really interested in the history of this part of the world or if you just would like to read a good adventure story or like a captivating tale about a lot of people, this trilogy is for you. Enjoy.

From the back cover: "It is 1839 and tension has been rapidly mounting between China and British India following the crackdown on opium smuggling by Beijing. With no resolution in sight, the colonial government declares war.

One of the vessels requisitioned for the attack, the Hind, travels eastwards from Bengal to China, sailing into the midst of the First Opium War. The turbulent voyage brings together a diverse group of travellers, each with their own agenda to pursue. Among them is Kesri Singh, a sepoy in the East India Company who leads a company of Indian sepoys; Zachary Reid, an impoverished young sailor searching for his lost love, and Shireen Modi, a determined widow en route to China to reclaim her opium-trader husband's wealth and reputation. Flood of Fire follows a varied cast of characters from India to China, through the outbreak of the First Opium War and China's devastating defeat, to Britain's seizure of Hong Kong."

This is also a book about books. Quite a few are mentioned, either because the characters are reading them or because they quote from them.

You can find my reviews of other Amitav Ghosh novels here.
Posted by Marianne at 14:06