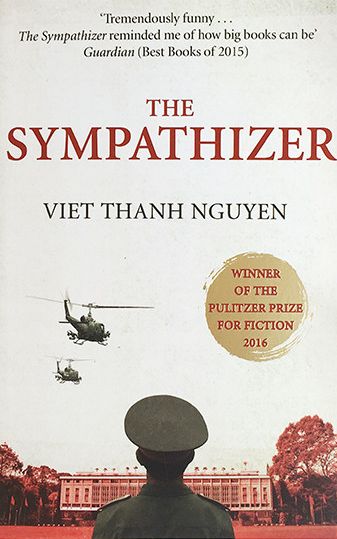 Not my first book about the Vietnam War. Not my first Pulitzer Prize winning novel. But certainly also not my last in both cases. A great description by a promising writer, I am sure we will read more by this talented guy.

Going through the "confessions" of "The Sympathizer", one comes to realize how difficult it is to stay loyal to any side in a war. And that there are no different kind of wars. Wars are horrible. For everyone involved. Wars don't just kill people, wars kill cultures, wars kill the goodness in human beings. Việt Thanh Nguyễn manages to portray that in a way not many others have so far.

It should instill in us all a wish for a better world, a wish for the end of all wars - if we don't have that already. And it certainly should push us to looking at refugees in a different way. They are not people who only come because we live in richer countries, they come because their only choice is between going to another country and being treated as dirt and death, humiliation, terror to them and their families.

Some of my favourite quotes:
"No matter how badly you might feel, take comfort in knowing there's someone who feels much worse."

"All wars are fought twice, the first time on the battlefield, the second time in memory."
(From Nothing Ever Dies: Vietnam and the Memory of War, Vieth Thanh Nguyen)

From the back cover:
"It is April 1975 and Saigon is in chaos. At his villa a general of the South Vietnamese army is drinking whiskey and with the help of his trusted captain drawing up a list of those who will be given passage aboard the last flights out of the country. The general and his compatriots start anew life in Los Angeles unaware that one among their number the captain is secretly observing and reporting on the group to a higher-up in the Viet Cong. The Sympathizer is the story of this captain a man brought up by an absent French father and a poor Vietnamese mother a man who went to university in America but returned to Vietnam to fight for the Communist cause. A gripping spy novel an astute exploration of extreme politics and a moving love story The Sympathizer explores a life between two worlds and examines the legacy of the Vietnam War in literature film and the wars we fight today. About the Author Viet Thanh Nguyen was born in Vietnam and raised in America. His stories have appeared in Best New American Voices TriQuarterly Narrative and the Chicago Tribune and he is the author of the academic book Race and Resistance. He teaches English and American Studies at the University of Southern California and lives in Los Angeles."

Việt Thanh Nguyễn received the Pulitzer Prize for "The Sympathizer" in 2016.
Posted by Marianne at 14:16