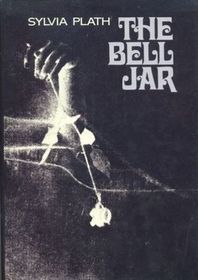 What an interesting read. I am not the biggest poetry reader, so I only ever heard of Sylvia Plath but never actually read anything by her. So, I was not unhappy when one of our book club members suggested this as our next read.

And what a book it is. I think everyone who thinks depression is not an illness and that people should just "snap out of it", "get busier so they don't think so much" etc., should read this. Although, I doubt that will ever happen.

Sylvia Plath manages to show us the inside of a young girl who goes from being an ordinary student who wants to become a writer to being possessed by the dark dog who doesn't want to leave her.

You can tell the author spoke from experience, She suffered from depression herself, committed suicide in the end, You can really understand, follow her way, her debilitating condition, her struggles, her tragedy. I am sorry she only wrote this one novel, she could have given the world so much more.

If you are interested in this topic, suffer from depression yourself or know someone who does, watch this video by the World Health Organization. "I had a black dog, his name was depression." And don't hesitate to look for professional help.

We discussed this in our book club in January 2017.

From the back cover:
"At last Sylvia Plath's only published novel is available in her own country, eight years after it was published in England under the pseudonym Victoria Lucas. This extraordinary work chronicles the crackup of Ester Greenwood: brilliant, beautiful, enormously talented, successful--but slowly going under, and maybe for the last time. Step by careful step, Sylvia Plath takes us with Ester through a painful month in New York as a contest-winning junior editor on a magazine, her increasingly strained relationships with her mother and the boy she dated in college, and eventually devastatingly, into the madness itself. The reader is drawn into her breakdown with such intensity that her insanity becomes completely real and even rational, as probable and accessible an experience as going to the movies. Such deep penetration into the dark and harrowing corners of the psyche is rare in any novel. In this case, the work reveals so much about the sources of Sylvia Plath's own tragedy that is publication must be considered a landmark in contemporary literature."

In 1982, Sylvia Plath won a posthumous Pulitzer Prize for "The Collected Poems".
Posted by Marianne at 14:50