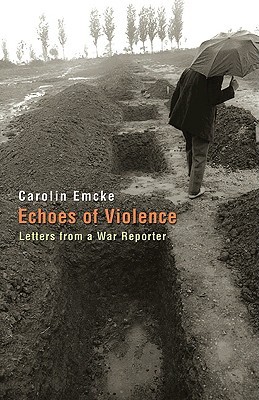 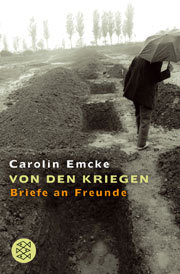 I learned about Carolin Emcke when she was awarded the Peace Prize of the German Book Trade and I wanted to read one of her books every since. Now I found one and am happy to say, it was worth the wait.

The author is a journalist, covering mainly war areas and she has written e-mails to her friend every time she returned from one of her journeys. Here, she published them. She visited Afghanistan, Columbia, Iraq, Kosovo, Lebanon, Nicaragua, Pakistan, Romania and the USA (before and after September 11th), and reports about her meetings with affected people. A brilliant account of what war can do to a people. If we didn't know it before, we should certainly learn it from this book. War is stupid! War is terrible! War should not be allowed! For any reason. Put the leaders in one room and let them fight about their problems themselves.

I have to include one quote from the book:
"History is the object of a construction whose place is formed not in homogenous and empty time, but in that which is fulfilled by the here-and-now." Walter Benjamin

From the back cover: "Echoes of Violence is an award-winning collection of personal letters to friends from a foreign correspondent who is trying to understand what she witnessed during the iconic human disasters of our time--in Iraq, Lebanon, Afghanistan, and New York City on September 11th, among many other places. Originally addressing only a small group of friends, Carolin Emcke started the first letter after returning from Kosovo, where she saw the aftermath of ethnic cleansing in 1999. She began writing to overcome her speechlessness about the horrors of war and her own sense of failure as a reporter. Eventually, writing a letter became a ritual Emcke performed following her return from each nightmare she experienced. First published in 2004 to great acclaim, Echoes of Violence in 2005 was named German political book of the year and was a finalist for the international Lettre-Ulysses award for the art of reportage.

Combining narrative with philosophic reflection, Emcke describes wars and human rights abuses around the world--the suffering of civilians caught between warring factions in Colombia, the heartbreaking plight of homeless orphans in Romania, and the near-slavery of garment workers in Nicaragua. Freed in the letters from journalistic conventions that would obscure her presence as a witness, Emcke probes the abyss of violence and explores the scars it leaves on landscapes external and internal."

Carolin Emcke received the Peace Prize of the German Book Trade (Friedenspreis) in 2016.
Posted by Marianne at 14:25