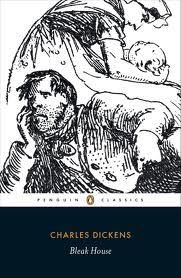 My seventh Dickens after "A Christmas Carol", "Great Expectations", "A Tale of Two Cities", "The Pickwick Papers", "Little Dorrit" and "Hard Times" but certainly not my last one. I hope I will get through all of his works one day.

A thousand pages of a well-written novel, Apparently, this is supposedly an early work of detective fiction and is one of his later titles. But apart from that, it certainly is a Dickens novel. The characters' names might not be as weird as in some of his books. Maybe he had no more ideas or he grew tired of finding those kind of names, I don't know. I missed it, of course.

This book is a page turner. Having worked in the legal system myself (even though in a different country), I could relate a lot to all the difficulties in the law suit. It's the same everywhere. That bit might be a little tedious for some readers but I promise, it's worth it.

What I love about Dickens, even though he grew up under poor circumstances, he can describe any character, rich or poor, clever or not so clever, he manages to put them all into his novels and makes them appear alive. He was a master of the pen.

"As the interminable case of Jarndyce and Jarndyce grinds its way through the Court of Chancery, it draws together a disparate group of people: Ada Clare and Richard Carstone, whose inheritance is gradually being devoured by legal costs; Esther Summerston, a ward of court, whose parentage is a source of deepening mystery; the menacing lawyer Tulkinghorn; the determined sleuth Inspector Bucket; and even Jo, a destitute crossing-sweeper. A savage, but often comic indictment of a society that is rotten to the core, Bleak House is one of Dickens' most ambitious novels, with a range that extends from the drawing-rooms of the aristocracy to the London slums."
Posted by Marianne at 13:50