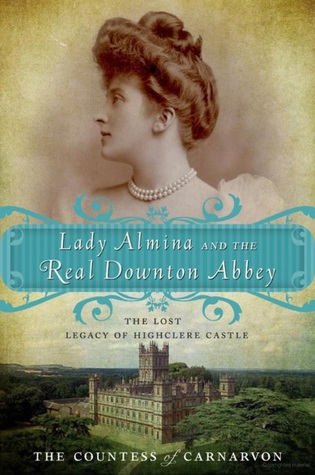 If you watched and enjoyed "Downton Abbey", this is the book for you. The series was filmed in Highclere Castle and the present Countess of Carnarvon describes the life of Lady Almina, the real Lady Cora Crawley, who opened her castle as a hospital in World War One. There are so many similarities in their lives, it's incredible.

I especially enjoyed the background not only of Lady Almina but also of her husband, George Herbert, the 5th Earl of Carnarvon who was involved in the discovery of the Tutankhamum tomb. Also, his half-brother was much engaged in the independence of Albania. They even offered him the throne. Lady Almina's father was Alfred de Rothschild, and there was another character to be added to the story.

And then there were a lot of pictures, not only of the family but only about the "downstairs" families who worked for the castle for generations.

All in all, an interesting book with a lot of historical background.

From the back cover:
"Lady Almina and the Real Downton Abbey tells the story behind Highclere Castle, the real-life inspiration and setting for Julian Fellowes's Emmy Award-winning PBS show Downton Abbey, and the life of one of its most famous inhabitants, Lady Almina, the 5th Countess of Carnarvon. Drawing on a rich store of materials from the archives of Highclere Castle, including diaries, letters, and photographs, the current Lady Carnarvon has written a transporting story of this fabled home on the brink of war.

Much like her Masterpiece Classic counterpart, Lady Cora Crawley, Lady Almina was the daughter of a wealthy industrialist, Alfred de Rothschild, who married his daughter off at a young age, her dowry serving as the crucial link in the effort to preserve the Earl of Carnarvon's ancestral home.  Throwing open the doors of Highclere Castle to tend to the wounded of World War I, Lady Almina distinguished herself as a brave and remarkable woman.

This rich tale contrasts the splendor of Edwardian life in a great house against the backdrop of the First World War and offers an inspiring and revealing picture of the woman at the center of the history of Highclere Castle."
Posted by Marianne at 16:26