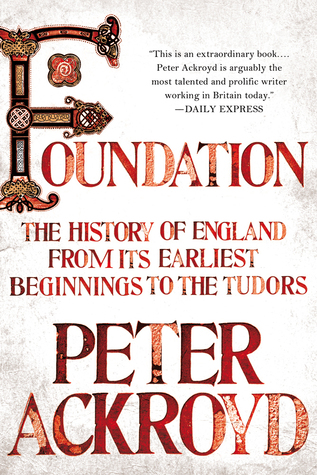 If you read my blog regularly, you will know that I am a big fan of British history. I couldn't even explain why, there has always been so much going on in that part of the world.

Anyway, I have read another book by Peter Ackroyd before, "Thames. Sacred River" and I knew he was a good writer. When I discovered, he'd written a series of four books about the whole history of English, I couldn't resist. This is the first one.

The author takes us from the first years of history, even before any written records, from the first flints that were found through stones of Stonehenge up until the first Tudor king, Henry VII. It's not just the chronological events that make this account so highly interesting, he interweaves stories about life and death of the ordinary people, how they got their names, for example, their social structure, what kind of food they had, how they punished their delinquents etc. etc. He hardly leaves any topic unmentioned. We can follow his stories and see how the society of today was formed, and that's a lot more than just knowing when Ethelred the Unready reigned or the Battle of Bosworth took place. I think this would be a great history book for pupils. There is a lot of detail in this book, yet it was written in a very entertaining style.

If you are only slightly interested in English history and would love to get a great picture, you should definitely consider this book. If you are highly interested, this is a Must Read.

From the back cover:
"Peter Ackroyd, whose work has always been underpinned by a profound interest in and understanding of England's history, now tells the epic story of England itself.

In Foundation, the chronicler of London and of its river, the Thames, takes us from the primeval forests of England's prehistory to the death, in 1509, of the first Tudor king, Henry VII. He guides us from the building of Stonehenge to the founding of the two great glories of medieval England: common law and the cathedrals. He shows us glimpses of the country's most distant past - a Neolithic stirrup found in a grave, a Roman fort, a Saxon tomb, a medieval manor house - and describes in rich prose the successive waves of invaders who made England English, despite being themselves Roman, Viking, Saxon, or Norman French.

With his extraordinary skill for evoking time and place and his acute eye for the telling detail, Ackroyd recounts the story of warring kings, of civil strife, and foreign wars. But he also gives us a vivid sense of how England's early people lived: the homes they built, the clothes the wore, the food they ate, even the jokes they told. All are brought vividly to life through the narrative mastery of one of Britain's finest writers."
Posted by Marianne at 12:21