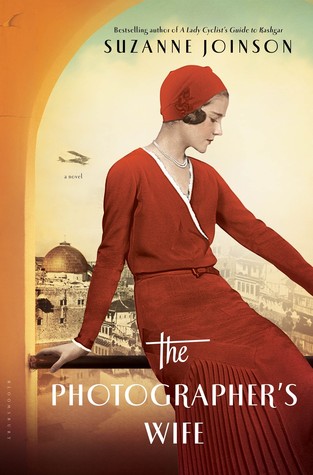 I stumbled upon this book in a bookshop and liked the title and the cover. My husband is a huge hobby photographer and so, I am "The Photographer's Wife". The cover shows the Dome of the Rock in Jerusalem. The story takes place in a country that I always like to read about, Israel, or Palestine back in the time the story starts. I just had to read it.

I just read another book ("The Night Watch") that was moving back in time and I've read others where the story hopped back and forth. I usually don't mind it but in both these cases, it was weird, almost as if they want you to live with a suspense until the end of the book, make it more interesting. However, it wasn't more interesting, I found it got more boring this way.

I would have thought, this story contributes more to understand what was going on in this country before the second world war, after all, that's what it says on the back cover. And it does. Prue, the protagonist of the story, is only eleven years old in 1920 and her father, a British architect, wants to redesign Jerusalem. She is caught up between the British and Germans and the local inhabitants and gets used by both sides.

As I say, the book didn't fascinate me much. The story seemed bland despite a lot of things going on. I heard Suzanne Joinson's book "A Lady Cyclist's Guide to Kashgar" was a national bestseller and that she received many awards for her writings but I doubt I will pick up one of her books anytime soon.

From the back cover: "Jerusalem, 1920: in an already fractured city, eleven-year-old Prudence feels the tension rising as her architect father launches a wildly eccentric plan to redesign the Holy City by importing English parks to the desert. From beneath tearoom tables, she eavesdrops on  the city's elite, as British colonials, exiled Armenians and German officials line up the pieces in a political game: a game destined to end in disaster.
When Prue's father employs a British pilot, William Harrington, to take aerial photographs of the city, Prue is uncomfortably aware of the attraction that sparks between him and Eleanora, the English wife of a famous Jerusalem photographer - a nationalist intent on removing the British.
Years later, in 1937, Prue is an artist living by the sea with her young son when Harrington pays her a surprise visit. What he reveals unravels her world, and she must follow the threads back to secrets long-ago buried in Jerusalem. Set in the complex period between the world wars, The Photographer's Wife is a powerful story of betrayal: between father and daughter, between husband and wife, and between nations and people."
Posted by Marianne at 16:47