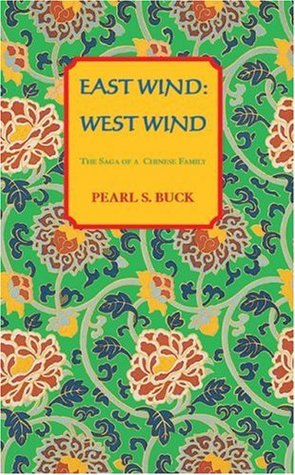 This was one of my first Pearl S. Buck novels. I came to adore her, read a lot of her books during my teenage years, probably because they were easy to read, yet so informative. I still love them and still read a book of hers from time to time.

I love the way Pearl S. Buck can explain the life in China, life in China during her lifetime, of course, I am well aware that it has changed a lot again. She has a wonderful way of explaining the Chinese way, almost in parables.

But this is history, life in Asia seen through the eyes of an American. The title already tells us about the divide between the East and the West, how people believe that they cannot be mixed. For example, the protagonist of the story, Kwei-Li, lives in a modern style house and is amazed by a lot of the features. Her brother brings home an American wife who is not accepted by the family. Lots of explanations about the different kind of life in the two different continents. This book achieves to portray this so wonderfully.

The biggest subject of the novel is the custom of arranging marriages. Kwei-Lan is married to a doctor, an educated man, who starts caring for her when she asks him to unbind her feet. Her brother refuses to marry the wife his parents have chosen for him and gets disinherited. A subject, most of us in the modern West are completely unaccustomed to.

Certainly one of Pearl S. Buck's books where we see the difference between our lives and that of the ancient Chinese most, where she serves it to us on a silver platter. I would probably recommend anyone to start with this book if they haven't read one by this great author.

"'East Wind: West Wind' is told from the eyes of a traditional Chinese girl, Kwei-lan, married to a Chinese medical doctor, educated abroad. The story follows Kwei-lan as she begins to accept different points of view from the western world, and re-discovers her sense of self through this coming-of-age narrative."

Find other books by Pearl S. Book that I read here.

Pearl S. Buck received the Nobel Prize for Literature in 1938 "for her rich and truly epic descriptions of peasant life in China and for her biographical masterpieces".

I contribute to this page: Read the Nobels and you can find all my blogs about Nobel Prize winning authors and their books here.
Posted by Marianne at 12:14