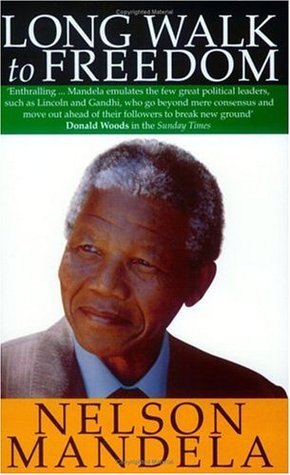 This has been on my list for a long time but it took another book club to put it on their list until I findally got to touch it.

I have always admired Nelson Mandela for how he coped with his life, for his struggle with oppression, for his fight for freedom. I mean, who wouldn't? He is one of the great heroes of our lifetime and the world would be a better place if everyone had just a little bit of Nelson Mandela in them.

The book hasn't changed my mind about him. If anything, it has enhanced my admiration. I have learned so much from this man just by following his thoughts in his autobiography. I hope I can use at least some of it in my life.

How does anyone cope with being imprisoend for almost thirty years. And not just being imprisoned, the situation in those jails was not exactly ideal, not what you can expect if you have to do time for any crime you would commit in our Western countries, time for a crime you actually commited, not for fighting for some of the basic rights any human being should be granted in the first place.

From his childhood living with an African chief to his studies of the law and the beginnings of his dedication of eliminating the cruel effects of racism in his country, this man has stood up to any injustice caused to the innocence. He was granted the Nobel Peace Prize and there probably has never been anyone more deserving for this.

What more is there to say than: Everybody should read this book.

"Nelson Mandela is one of the great moral and political leaders of our time: an international hero whose lifelong dedication to the fight against racial oppression in South Africa won him the Nobel Peace Prize and the presidency of his country. Since his triumphant release in 1990 from more than a quarter-century of imprisonment, Mandela has been at the center of the most compelling and inspiring political drama in the world. As president of the African National Congress and head of South Africa's antiapartheid movement, he was instrumental in moving the nation toward multiracial government and majority rule. He is revered everywhere as a vital force in the fight for human rights and racial equality.LONG WALK TO FREEDOM is his moving and exhilarating autobiography, destined to take its place among the finest memoirs of history's greatest figures. Here for the first time, Nelson Rolihlahla Mandela tells the extraordinary story of his life - an epic of struggle, setback, renewed hope, and ultimate triumph."

Nelson Mandela received the Nobel Prize for Peace in 1993 "for ... work for the peaceful termination of the apartheid regime, and for laying the foundations for a new democratic South Africa".

I contribute to this page: Read the Nobels and you can find all my blogs about Nobel Prize winning authors and their books here.
Posted by Marianne at 15:41