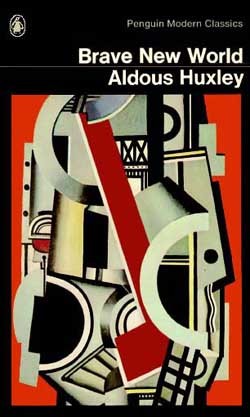 I have read several dystopian novels. And there is some truth in all of them. If we consider when the book was written and what was the greatest fear of the time, we recognize the foundation of their subject. And the more time has passed, the better we can judge whether the author was right or not.

Interestingly enough, here we are, eighty years later, and we still talk about the same subject, gene manipulation. This book is so up-to-date, it might as well have been written yesterday. That's how great it is, you can tell good writing.

There are a lot more ideas Huxley was afraid of, e.g. the "hypnopaedic process" where children are inundated with hypnotic messages, where they get "pre-conditioned" for the life they are destined to lead. Other processes makes them not like flowers and books, for example. Of course, you can use those findings in a positive way, e.g. take your baby on your lap while reading to them. And would I want to choose to have my migraine gene removed from my children. Definitely!

But on the whole, I am more than glad not having to live in this "Brave New World", having the choice of what I want to be, who I want to be with. As in most dystopian novels, there is always a kernel of truth in them. We need to read them in order to know what to do to avoid these theories becoming reality.

"This fantasy of the future is one of Aldous Huxley’s best-known books. lts impact on the modern world has been considerable. Abandoning his mordant criticism of modern men and morals, the author switches to the future and shows us life as he conceives it may be some hundreds of years hence. Written in the thirties when - whatever the immediate outlook may have been - people believed that ultimately all would be for the best in the best of all possible worlds, this novel is a warning against such optimism. With irrepressible wit and raillery, Huxley satirizes the idea of progress put forward by the scientists and philosophers; and his world of test-tube babies and 'feelies' is uncomfortably closer now than it was when the book was first published."
Posted by Marianne at 17:31