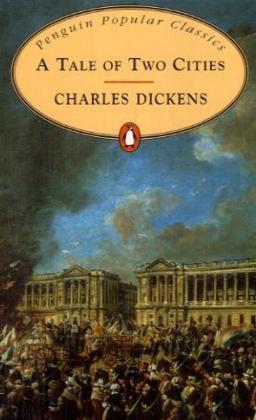 Two of the most famous quotes in one book, how often do you get that? But is the rest of the book as good as the beginning and the end? It is. Whatever you look for in a book, "A Tale of Two Cities" has it, history, politics, revolution, love, drama, intrigue, revenge, forgiveness, sacrifice, you name it, it's in it. How often can you say that about a novel?

Even though Dickens didn't live during the French Revolution, he captures the spirit of the time, he portrays his characters as lively as posible and he manages to bring in everything that was important so people born a hundred years later could imagine living during that time and even today, another 150 years after it was written and while the world has changed even more, we can imagine the same.

Oh, and if you wonder about the beginning and the end, it starts with "It was the best of times, it was the worst of times ..." and ends with "It is a far, far better thing that I do, than I have ever done; it is a far, far better rest that I go to than I have ever known." That is good writing and I'm not surprised Mr. Dickens has been so well-known and admired for centuries. His stories just don't get old.

In any case, if you didn't guess it, yet, I loved this book.

"After eighteen years as a political prisoner in the Bastille, the ageing Doctor Manette is finally released and reunited with his daughter in England. There the lives of two very different men, Charles Darnay, an exiled French aristocrat, and Sydney Carton, a disreputable but brilliant English lawyer, become enmeshed through their love for Lucie Manette. From the tranquil roads of London, they are drawn against their will to the vengeful, bloodstained streets of Paris at the height of the Reign of Terror, and they soon fall under the lethal shadow of La Guillotine."