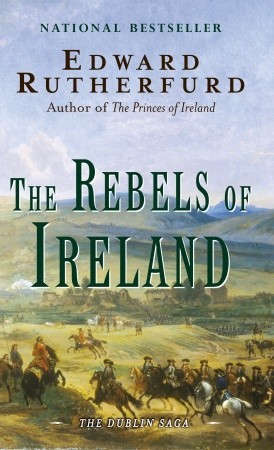 I rarely read the sequel to a book right away, I usually take a little break from the story. But this time, I could not resist. After reading "Dublin", I just had to carry on reading about all those Irish families that witnessed the history of this interesting country first hand.

This novel picks up in 1597, right after the first one finishes, we follow the descendants of the brave characters from book one carrying on the struggle of their ancestors, we follow them through the occupation through the English with the various trials of erasing all Catholicism from the island through the famine to the Easter rising until the declaration of the Republic. What a vivid history.

One thing this book teaches us more than ever, any religious war or dispute is not really about religion but about power and money.

"Edward Rutherfurd’s stirring account of Irish history, the Dublin Saga, concludes in this magisterial work of historical fiction. Beginning where the first volume, The Princes of Ireland, left off, The Rebels of Ireland takes us into a world transformed by the English practice of 'plantation,' which represented the final step in the centuries-long British conquest of Ireland. Once again Rutherfurd takes us inside the process of history by tracing the lives of several Dublin families from all strata of society ' Protestant and Catholic, rich and poor, conniving and heroic.

From the time of the plantations and Elizabeth’s ascendancy Rutherfurd moves into the grand moments of Irish history: the early-17th-century 'Flight of the Earls,' when the last of the Irish aristocracy fled the island; Oliver Cromwell’s brutal oppression and confiscation of lands a half-century later; the romantic, doomed effort of 'The Wild Geese' to throw off Protestant oppression at the Battle of the Boyne. The reader sees through the eyes of the victims and the perpetrators alike the painful realities of the anti-Catholic penal laws, the catastrophic famine and the massive migration to North America, the rise of the great nationalists O’Connell and the tragic Parnell, the glorious Irish cultural renaissance of Joyce and Yeats, and finally, the triumphant founding of the Irish Republic in 1922.

Written with all the drama and sweep that has made Rutherfurd the bestselling historical novelist of his generation, The Rebels of Ireland is both a necessary companion to The Princes of Ireland and a magnificent achievement in its own right."

I also highly recommend  "London" and "The Forest" by the same author.

Find a link to all my reviews on his other novels here.
Posted by Marianne at 11:49