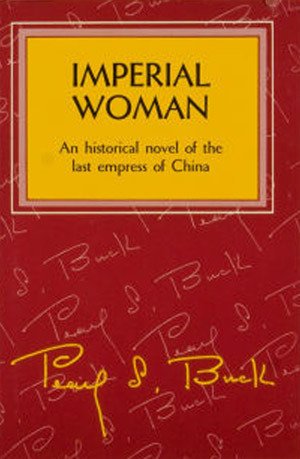 A mixture between fiction and non-fiction, a biography but also a novel. Tzu Hsi, the last Empress in China. Her life and her death.

Pearl S. Buck manages, as always, to describe the life of this extraordinary city in a gripping way. A fascinating description of a world long gone, the way people lived in the Far East.

It is difficult to understand in our modern world how families could send their daughters to become a concubine of any man, even if he was to become the emperor of a vast dynasty.

I really love this book that resonates with me even years after I read it the last time.

"Imperial Woman is the fictionalized biography of the last Empress in China, Ci-xi, who began as a concubine of the Xianfeng Emperor and on his death became the de facto head of the Qing Dynasty until her death in 1908.Buck recreates the life of one of the most intriguing rulers during a time of intense turbulence.Tzu Hsi was born into one of the lowly ranks of the Imperial dynasty. According to custom, she moved to the Forbidden City at the age of seventeen to become one of hundreds of concubines. But her singular beauty and powers of manipulation quickly moved her into the position of Second Consort.Tzu Hsi was feared and hated by many in the court, but adored by the people. The Empress's rise to power (even during her husband's life) parallels the story of China's transition from the ancient to the modern way."

Find other books by Pearl S. Book that I read here.

Pearl S. Buck received the Nobel Prize for Literature in 1938 "for her rich and truly epic descriptions of peasant life in China and for her biographical masterpieces".

I contribute to this page: Read the Nobels and you can find all my blogs about Nobel Prize winning authors and their books here.
Posted by Marianne at 13:07