Gopnik, Adam "Paris to the Moon" 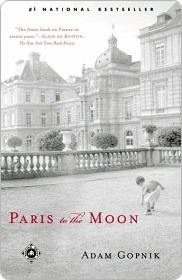 I love Paris. So, when I saw this book title, I just had to get the book even though it looked a tad on the chick lit side.

I have read quite a few books about expats in a new country, especially English or Americans going to France. So, I was a little weary about the book when I started reading it.

However, contrary to most of the other expats who go to France, this journalist went to Paris. I absolutely love Paris. And I love Adam Gopnik's kind of humour, so I had no problem getting through the 350 pages in no time. It is funny and written with a lot of affection for his host city without leaving out the negative sides any expat lives through in their new place.

It's an easy read but still quite worthwhile.

"In 1995, Adam Gopnik, his wife, and their infant son left the familiar comforts and hassles of New York for the urbane glamour of Paris. Charmed by the beauties of the city, Gopnik set out to experience for himself the spirit and romance that has so captivated American writers throughout the twentieth century. In the grand tradition of Stein and Hemingway, Gopnik planned to walk the paths of the Tuilleries, to enjoy philosophical discussion in cafés - in short, to lead the fabled life of an American in Paris. Of course, there was also the matter of raising a child and carrying on with everyday, not-so-fabled life."
Posted by Marianne at 11:29