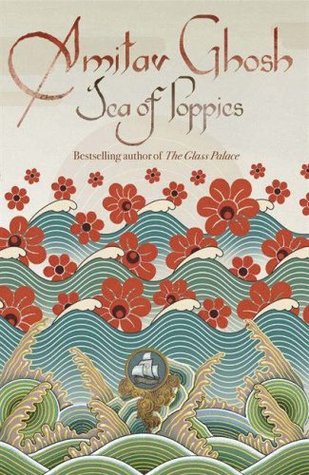 This novel is Part 1 of the "Ibis Trilogy".

I have only read "The Glass Palace" by this author so far. It was a book club read and it is one of my favourite books ever. I don't want to say too much in the first line but this novel will join it on my shelf of favourites.

This book has it all, history, love and war, the people from different countries. Amitav Ghosh manages to invite us into this world. I love it when you have the feeling that you are there. You can see the colours, hear he sounds, smell the smells, it's so lifelike.

This novel describes the fate of a ship and its passengers, At the beginning, we get to know the sailors, then the different people who will become passengers later on, all from different kinds of life.

Amitav Ghosh manages to describe all classes of people so well, the different castes in India, the British and other foreigners, all neatly put into their respective drawers. The women belong in yet another part, they have nothing to say, they get married off to someone, have to produce the heir. Everyone is forced into a certain role due to social and political reasons. And yet, everyone tries to live with their fate in their one different way, some are subservient, others rebellious. Some form an attachment to people from the other groups, others desperately try to keep that invisible wall between them.

In any case, this book teaches so much about life in India at that time, about the Opium War. We learn about the fate of the farmers who are forced by the colonialists to produce opium which they, in turn, import into China so they can afford the trading with that country. So many lives are affected and destroyed because some Europeans want Chinese products. It also is a lot easier for the occupiers to destroy the lives of anyone who originally lived in the country than the other way around. We see that one wrong accusation can take away one man's wealth and honour.

I would have liked to have some sort of ending to this part of the book but because I started it late, "River of Smoke" was already out and I carried on with it right away.

I also read the third one in the series now: "Flood of Fire".

In an interview the author mentioned that "oil is the opium of today." I think he is absolutely right and it might help to think about what we are doing to people in the other parts of the world today.

I guess some people might have a problem reading this as there are a lot of different versions of English used, that of the sailors is different of that of the Indians, that of the British different than that of the other foreigners, there are many different dialects and idiosyncrasies. It seems irritating at the beginning but I can only encourage everyone to keep on going, it's definitely worth it. We also learn that a lot of words have come to the English language from the colonies this way. An interesting observation, if you like language.

I read this book as part of the Reading Challenge "Chunky Books". I love that group and am looking forward to reading and discussing a lot more tomes with this group.

"On an old slaving ship named the 'Ibis', fate has thrown together a truly motley crew of sailors, coolies, and convicts, including a bankrupt raja, a French runaway and a widowed opium farmer. As their old family ties are washed away, they, they come to view themselves as jahaj-bhais, or ship-brothers. Against the backdrop of the Opium Wars, this unlikely dynasty is what makes 'Sea of Poppies' so breathtakingly alive - a masterpiece from one of the world's finest novelists."

There is a good website about "The Ibis Trilogy" and "Sea of Poppies".

Amitav Gosh was shortlisted for the Booker Prize for "Sea of Poppies" in 2008.
Posted by Marianne at 20:10