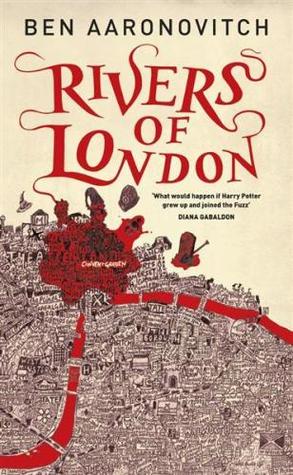 I originally bought this book because I thought it might be similar to those of Edward Rutherfurd, describing the history of a city or a country. I also liked the cover, a map of London. And since London is my favourite city in the whole world, I just had to read the book.

When I started reading it, I noticed it was completely different from what I expected. It was a police story, a crime novel mixed with fantasy elements. All genres I usually stay far away from.

However, Ben Aaronovitch has such a unique and funny way to describe his characters and the story, the good guys as well as the bad guys, the living as well as the dead, the spirits, the events. The author manages to create suspension, you hardly want to put down the book. The plot is witty, the characters likable, the mix of reality and fantasy interesting.

It was completely worth reading the book, and I will probably read its follow-ups "Moon Over Soho" and "Whispers Under Ground". I wouldn't be surprised to find it made into a movie or TV series in the future, either. I'm sure one of those talented young British actors can play the protagonist, Peter Grant, and there are plenty of fantastic older guys around who can play his master Thomas Nightingale.

And - even though I think "Midnight Riot" is not a bad title for this novel, as usual, I really have no idea why this novel has to have a different title in the United States. I'm sure the American reader knows where London is.

"My name is Peter Grant and until January I was just probationary constable in that mighty army for justice known to all right-thinking people as the Metropolitan Police Service and to everyone else as the Filth.

My only concerns in life were how to avoid a transfer to the Case Progression Unit - we do paperwork so real coppers don't have to.Then one night I tried to take a witness statement from someone who was already dead but disturbingly voluble ... and that led me to Inspector Nightingale, the last wizard in England.

And that, as they say, is where the story really starts.

There's something festering at the heart of the city I love, a malicious vengeful spirit that's taking ordinary Londoners and twisting them into something awful; mannequins to act out its drama of violence and despair.

The spirit of riot and rebellion has awakened in the city, and it's falling to me to bring order out of chaos - or die trying."

I found a good site about this series: The Follypedia.
Posted by Marianne at 17:04