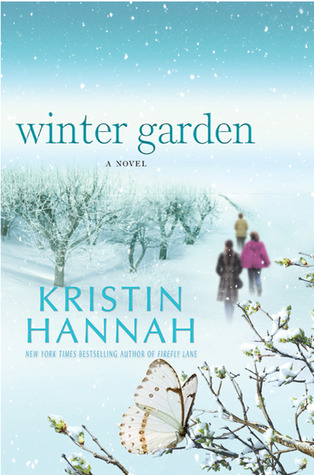 The description of this book sounded a little too chick lit for me that I would have desperately wanted to read it but it was a book club read, so as a conscientious member, I read it.

It certainly wasn't badly written but a little too superficial for my liking. I could judge the book by the cover. True, the story of Anya, the mother of two grown up girls, is interesting and the fact that she has not talked about it for most of her life makes it a little mysterious.

The two sisters, well, they both have their own problems but I doubt that they stemmed from the fact that their mother hid her story, didn't want to talk about her past. Most kids whose parents have grown up during wartime have to live with this. And, like Anya, a lot of those people think what happened to their loved ones is their fault. No, the war is at fault, every single person tries to cope with it in their very own matter, tries to make decisions that they might regret later but they have to make a decision. Who knows what decision we would make in the same circumstances.

I didn't like the ending, it was too much viewed through rose-tinted glasses. Overall, this was not my book, too shallow.

What adds to this is that we already read a book about the Leningrad siege in November 2011, "The Siege" by Helen Dunmore.

The book club had a bit of a different opinion in the discussion, although only a slightly better one.
They mostly agreed that "Winter Garden" was a quick read, almost like a "beach read" (just another "nicer" word for chick lit). The first half of the book was a little slower-paced compared to the finish. It seemed like there were two stories to tell: one was obviously the mother-daughter relationship and the other the Siege of Leningrad as told through Anya's fairy tales. We felt that the author tried too hard to combine the stories at times, and this resulted in lots of superfluous details and a longer book than was necessary. The end of the book was disappointing. All of us thought it was a little strange how suddenly Anya, Meredith, and Nina got on a cruise ship to Alaska and started drinking vodka and becoming best friends. The unexpected reunion between Anya and her long-lost Russian daughter in Alaska was too far-fetched.

The discussion of Russia and Stalin brought up another interesting topic. One of the members talked about a documentary she recently watched ("Hitler's Children") about the children of dictators/oppressors, and how they have dealt with their parents' unfortunate pasts.

"Meredith and Nina Whitson are as different as sisters can be. One stayed at home to raise her children and manage the family apple orchard; the other followed a dream and traveled the world to become a famous photojournalist. But when their beloved father falls ill, Meredith and Nina find themselves together again, standing alongside their cold, disapproving mother, Anya, who even now, offers no comfort to her daughters. As children, the only connection between them was the Russian fairy tale Anya sometimes told the girls at night. On his deathbed, their father extracts a promise from the women in his life: the fairy tale will be told one last time - and all the way to the end. Thus begins an unexpected journey into the truth of Anya’s life in war-torn Leningrad, more than five decades ago. Alternating between the past and present, Meredith and Nina will finally hear the singular, harrowing story of their mother’s life, and what they learn is a secret so terrible and terrifying that it will shake the very foundation of their family and change who they believe they are."

We discussed this in our book club in May 2013.

I have read "Angel Falls" by the same author.
Posted by Marianne at 16:50