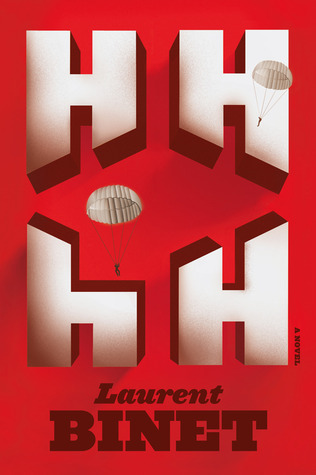 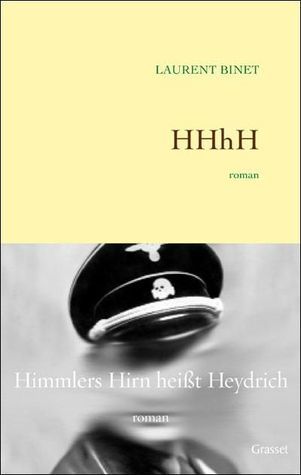 "HHhH", the French title is the same as the English, the German has an addition that explains the weird letters: Himmlers Hirn heißt Heydrich. The translation: Himmler's Brain is called Heydrich.

The story is not about Hitler or Himmler but about Reinhard Heydrich, a high ranking German Nazi officer and Jozef Gabčík, a Slovak soldier, and Jan Kubiš, a Czech solider and their "Operation Anthropoid" whose goal was Heydrich's assassination.

Heydrich was a member of the SD (Sicherheitsdienst = security service, part of the SS). The least-known and the most sinister of all Nazi organizations. Including the Gestapo. He didn't just'invent' the yellow star to be worn by all Jews, he also designed the gas chambers. Needless to say, he was considered the most dangerous man in the Third Reich, they called him the "Hangman of Prague", the "Butcher" and the "Blond Beast". Not really a title any sane person would want to achieve.

Lauren Binet has found a unique way of combining the telling of a non-fiction story, part of an autobiography and making that into a novel. Apparently, he calls it the infranovel. Interesting way to get through the subject, great way to get the reader accustomed to the characters in the book. It might need some getting used to him jumping from the first to the third person but I really love his style.

Even if you don't want to read any more about WWII or the Nazis, this is one book you should give a try. There is a lot of heart in it and it is very informative at the same time.

He starts with: "Let me tell you a story. A true story. A story that you might know, but only in the passing." and that is how he carries on, talking to the reader as if he were in the same room."

And I shall finish with another quote:
"Memory is of no use to the remembered, only to those who remember." Therefore, let us remember.

"'HHhH: 'Himmlers Hirn heisst Heydrich', or 'Himmler’s brain is called Heydrich'. The most dangerous man in Hitler’s cabinet, Reinhard Heydrich was known as the 'Butcher of Prague'. He was feared by all and loathed by most. With his cold Aryan features and implacable cruelty, Heydrich seemed indestructible - until two men, a Slovak and a Czech recruited by the British secret service, killed him in broad daylight on a bustling street in Prague, and thus changed the course of History.
Who were these men, arguably two of the most discreet heroes of the twentieth century? In Laurent Binet’s captivating debut novel, we follow Jozef Gabćik and Jan Kubiš from their dramatic escape of Nazi-occupied Czechoslovakia to England; from their recruitment to their harrowing parachute drop into a war zone, from their stealth attack on Heydrich’s car to their own brutal death in the basement of a Prague church.

A seemingly effortlessly blend of historical truth, personal memory, and Laurent Binet’s remarkable imagination, HHhH - an international bestseller and winner of the prestigious Prix Goncourt du Premier Roman - is a work at once thrilling and intellectually engrossing, a fast-paced novel of the Second World War that is also a profound meditation on the nature of writing and the debt we owe to history."