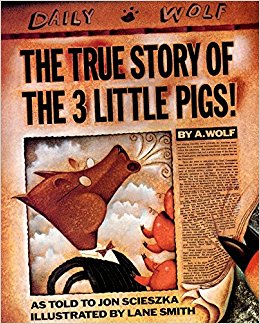 This is the true story of the "Three Little Pigs and the Big Bad Wolf" as retold by Alexander T. Wolf. Or is it "The Three Bad Pigs and the Nice Little Wolf"?

In any case, the story is hilarious, for children and adults alike. It is not just that the well known story has been turned around and the wolf is the innocent one in this scenario, there are so many aspects to the story that can be discussed with children of all ages whether they are still too little to read it themselves or are older than the kids who usually read fairy tales and picture books.

The wolf insists he only wanted to borrow sugar to make a cake for his grandmother's birthday. Poor wolf. It's not his fault he likes to eat pork.

The illustrations are also wonderful. A great book all around.

"A spoof on the three little pigs story, this time told from the wolf's point of view. Lane Smith also illustrated Hallowe'en ABC which was one of The New York Times Best Illustrated Books of the Year."
Posted by Marianne at 19:31