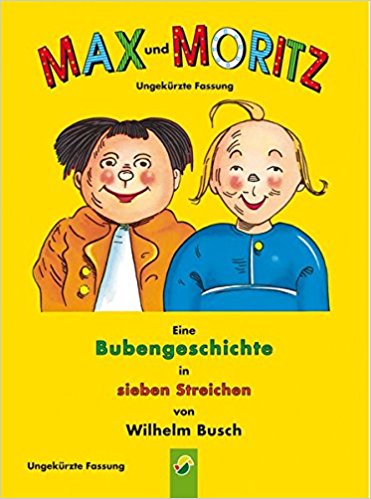 "Ah, how oft we read or hear of
Boys we almost stand in fear of!
For example, take these stories
of two youths, named Max and Moritz,
Who, instead of early turning
Their young minds to useful learning,
Often leered with horrid features
At their lessons and their teachers."

This is the English translation of the first lines of this story that was and is so well known to German children. I found an online version in English here at Children's Books Online.

The stories are probably considered too harsh today to be read to children but I think only people who wouldn't read fairy tales to children, either, would think that. Children love fairy tales and this is almost like a fairy tale, however, without magic and without a happy ending.

Still, if you like to get to know some classical children's books, "Max and Moritz" definitely belong to them. They are very mischievous, anything young boys would like to do they do. But in the end they get punished hardly. So, maybe parents thought that might be a lesson for children that they don't do anything bad. I doubt that has ever stopped on but I loved the stories of Max and Moritz as a child and still appreciate the rhymes the melody of which has been well transposed into English.

"A new translation by Andy Gaus of these classic popular satirical Wilhelm Busch cartoons, with original illustrations, in black and white, throughout. This volume includes Max & Moritz a Bad-Boy Story in Seven Tricks; Ice Peter, A Funny Picture Story; Diogenes and the Bad Boys of Corinth; four poems from Critique of the Heart; and a biographical note on Wilhelm Busch."
Posted by Marianne at 16:46