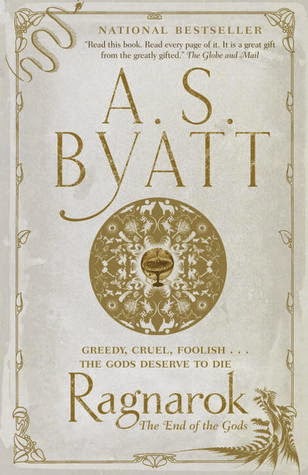 A retelling of the Norse mythology. I'm not really into fantasy but was interested in this book for two reasons, I thought Norse myths might be interesting and I like A.S. Byatt.

Was it a good enough reason to pick up the book? Not really, the stories were not interesting enough for me to really get engaged.

The best part of the book were the author's "Thoughts on Myth" at the end of the stories where she explains where certain words come from and why she was re-writing something that has been written already a hundred times before.

Still, the author has a great way of telling any story, I guess. That's why I still enjoyed reading the book.

From the back cover: "The gods have abandoned the earth. A great battle is afoot that could destroy everything. The time of Ragnarok has begun...
Into her account of the end of the gods, the Booker Prize-winning author A. S. Byatt weaves the story of a young girl evacuated to the British countryside during the Second World War. Struggling to make sense of her life, she is given a book of Norse myth, and her inner and outer worlds are transformed."

I have also read "Possession" by A.S. Byatt. It is one of my favourite books.
Posted by Marianne at 14:55