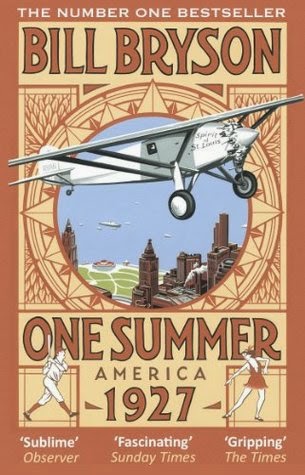 What can I say about this book? Bill Bryson belongs to some of my favourite authors. This is certainly not one of my favourite books by him. Not because it's not funny because most of his non-travel books are not necessarily funny. Not because it's about an area I haven't visited because that is the fact with most of the destinations and places in his books, as well.

I think it is mainly because I'm not much interested in sports and there is a lot of it in there, especially of American sports that is even less known to me than what they do over here, just not a fan of group sports, never have been, never will be. But also because I learned a lot of things that really shocked me about people who I hadn't if not admired then at least estimated before. And it's also not that I didn't want to learn that. If someone is not a good person, I'd rather know.

It just seems as if that whole year 1927 was a horrible one and that the picture I get about the United States of America isn't a nice one, either. There is a lot of crime and even more greed in this book. This is probably the first Bill Bryson book I would not want to read again.

It won't keep me from reading any other books of this fabulous author but had it been my first one, I probably wouldn't have tried any more.

From the back cover: "Britain's favourite writer of narrative non-fiction Bill Bryson travels back in time to a forgotten summer when America came of age, took centre stage, and, in five eventful months, changed the world for ever.
In the summer of 1927, America had a booming stock market, a president who worked just four hours a day (and slept much of the rest of the time), a semi-crazed sculptor with a mad plan to carve four giant heads into an inaccessible mountain called Rushmore, a devastating flood of the Mississippi, a sensational murder trial, and a youthful aviator named Charles Lindbergh who started the summer wholly unknown and finished it as the most famous man on earth. (So famous that Minnesota considered renaming itself after him.)
It was the summer that saw the birth of talking pictures, the invention of television, the peak of Al Capone’s reign of terror, the horrifying bombing of a school in Michigan by a madman, the ill-conceived decision that led to the Great Depression, the thrillingly improbable return to greatness of a wheezing, over-the-hill baseball player named Babe Ruth, and an almost impossible amount more.
In this hugely entertaining book, Bill Bryson spins a story of brawling adventure, reckless optimism and delirious energy, with a cast of unforgettable and eccentric characters, with trademark brio, wit and authority."

Read more from this author, I have listed all his books in this post:
Bill Bryson – Funniest Author Ever
Posted by Marianne at 17:21