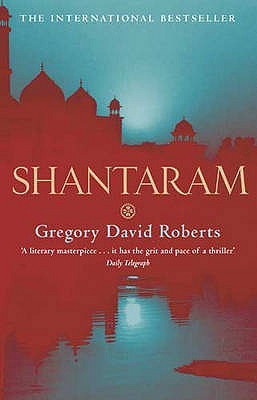 A highly interesting book that was recommended to me by several friends.

This is novel is based on the life of an Australian guy, the author Gregory David Roberts, who went to prison for armed robbery and then fled from there to start a life in India. He didn't really lead a straight life after that, he led a very interesting one. We can follow him fighting the Mujahedeen, or living in the slums and running a hospital there. In any case, there is always something going on in "Shantaram's" life. (The name was given to him by his Indian friends.) The story is gripping, highly provocative, it shows the lows and the highs of a life. It is a story about everything, love and hate, crime and punishment, the rich and the poor, the corrupt and the honest, and the meaning of life as well as its banalities. More than 900 exciting pages that you can't put down. Well, at least I couldn't.

This book will follow me forever, of that I am sure.

One of my favourite quotes:
"The world is run by one million evil men, ten million stupid men, and one hundred million cowards."
and
"There's nothing so depressing as good advice."

And one more thing. I loved how easily the protagonist picks up languages.

From the back cover: "'It took me a long time and most of the world to learn what I know about love and fate and the choices we make, but the heart of it came to me in an instant, while I was chained to a wall and being tortured.'

So begins this epic, mesmerizing first novel set in the underworld of contemporary Bombay. Shantaram is narrated by Lin, an escaped convict with a false passport who flees maximum security prison in Australia for the teeming streets of a city where he can disappear.

Accompanied by his guide and faithful friend, Prabaker, the two enter Bombay's hidden society of beggars and gangsters, prostitutes and holy men, soldiers and actors, and Indians and exiles from other countries, who seek in this remarkable place what they cannot find elsewhere.

As a hunted man without a home, family, or identity, Lin searches for love and meaning while running a clinic in one of the city's poorest slums, and serving his apprenticeship in the dark arts of the Bombay mafia. The search leads him to war, prison torture, murder, and a series of enigmatic and bloody betrayals. The keys to unlock the mysteries and intrigues that bind Lin are held by two people. The first is Khader Khan: mafia godfather, criminal-philosopher-saint, and mentor to Lin in the underworld of the Golden City. The second is Karla: elusive, dangerous, and beautiful, whose passions are driven by secrets that torment her and yet give her a terrible power.

Burning slums and five-star hotels, romantic love and prison agonies, criminal wars and Bollywood films, spiritual gurus and mujaheddin guerrillas --- this huge novel has the world of human experience in its reach, and a passionate love for India at its heart. Based on the life of the author, it is by any measure the debut of an extraordinary voice in literature."
Posted by Marianne at 16:57