Wolf, Naomi "The Beauty Myth: How Images of Beauty are used against Women" 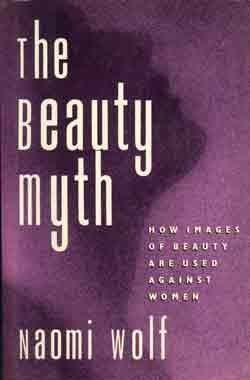 Wolf, Naomi "The Beauty Myth: How Images of Beauty are used against Women" - 1990

The next book introduced into the Emma Watson Book Club - Our Shared Shelf.

I didn't think I would like this book as much as I did. I didn't think it would be as contemporary as it was. After all, this book was written in 1990 about the way women "obey" the "God of Beauty". As I can tell when I look around, nothing has changed since then, even though almost three decades have passed.

What can be done? First of all, I think this book should be read by everyone, not only women. There aer so many ideas and thoughts that should make every woman be happy with the body they have and not try to run after a fantasy image.

We should all be aware that the image of a "beautiful woman" is imposed on us, that hardly anyone really judges us the way we think they do and that, if we all stick together, women shouldn't be regarded in the workforce the same way as men are.

I remember the many articles I read about Angela Merkel, our current chancellor, and her clothes. Articles that would never have been written about her male colleagues. And I always wondered what that has to do with her ability to run a country. Nothing. She dresses decently and that's enough for me. And that should be enough for any woman who works no matter where.

I never had big issues with the way I look. I wouldn't call myself pretty and I certainly don't have a good figure anymore after giving birth to two children but I've always told myself whoever doesn't like me this way can just stay away. But I know how many women do have issues, they go from one diet to the next and suffer even more afterwards. If only they would all read this book!

However, there are a few things I have learned from this book. For example, I now know why I don't like women's magazines.

If I had a daughter, I would give her this book right now. But I think my sons should read it, as well in order to help their partners in future.

From the back cover:
"In the struggle for women's equality, there is one hurdle that has yet to be fully cleared - the myth of female beauty. It challenges every woman, every day, by seeking to undermine psychology and covertly the material freedoms that feminism has achieved for women. And, fueled by new technology in media and medicine, its ravages are reaching epidemic proportions.
The Beautify Myth cuts to the root of the 'beauty backlash,' exposing the relentless cult of female beauty - antierotic, averse to love, and increasingly savage - as a political weapon against women's recent advances, placing women in more danger today than ever before.
Naomi Wolf tracks the tyranny of the beauty myth throughout its history and reveals its newly sophisticated function today - in the home and at work; in literature and the media; in relationships, between men and women and between women and women. With an arsenal of sometimes shocking examples, Wolf confronts the beauty industry and its influence and uncovers the ominous, hidden agenda that drives this destructive obsession.
In a searing, timely analyses, The Beauty Myth indicts the new forces coercing women into participating in their own torture - starving themselves and even submitting their bodies to the knife. A direct descendant of The Female Mystique and The Female Eunuch, this book is a cultural hand grenade for the 1990s."
Posted by Marianne at 15:05