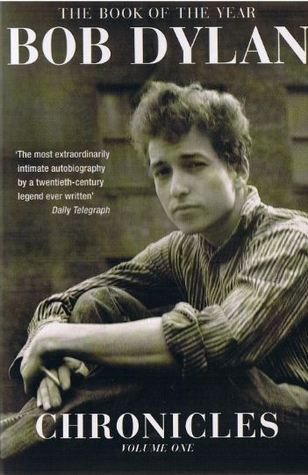 Last year's recipient of the Nobel Prize for Literature. I don't need his book to know he totally deserved it but he talks about his life and that is quite interesting.

As I wrote in my post "Nobel Prize for Literature 2016", I look forward to the day where the newest winner of the Prize for Literature is announced and - together with the rest of the world - I was very astonished about last year's announcement. Totally unexpected but well deserved, Bob Dylan received the honour in 2016.

Bob Dylan, the hero of my youth, has written so many brilliant songs with wonderful texts and I could probably go on and write about every single one of his songs whose lyrics I know by heart. But - as this is my book blog, I read his biography instead. The 75-year-old rock legend writes about his life. Or is he? I have read many comments that this is not written by him but that it is mainly a collection of what other people wrote about him.

However, I did enjoy learning about his life. I am not a reader of gossip magazines so I hardly ever know whether my favourite singers or actors are single, married, divorced, gay, have children ... Sometimes I find it out via Wikipedia but that is usually just in combination with a search for one of their films or songs.

Again, I love Bob Dylan's work. His lyrics are as important today as they were sixty years ago. The times were ready to be a-changing back then and it is time they are a-changing again. Let's all listen to his songs and make this a better world.

From the back cover:
"This is the first spellbinding volume of the three-volume memoir of one of the greatest musical legends of all time. In CHRONICLES Volume I, Bob Dylan takes us back to the early 1960s when he arrived in New York to launch his phenomenal career. This is Dylan's story in his own words - a personal view of his motivations, frustrations and remarkable creativity. Publication of CHRONICLES Volume I is a publishing and cultural event of the highest magnitude."

Bob Dylan received the Nobel Prize for Literature in 2016 "for having created new poetic expressions within the great American song tradition".

I contribute to this page: Read the Nobels and you can find all my blogs about Nobel Prize winning authors and their books here.
Posted by Marianne at 15:57