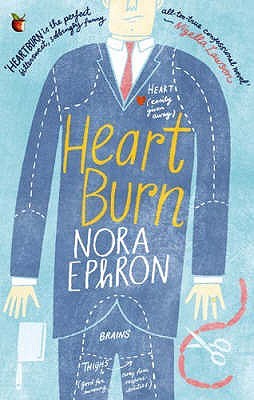 Most of my friends know what a big fan I am of Nora Ephron. I love her movies and I love everything I have read that she has written. Luckily for me, I haven't read everything, yet. One of those still wanted to be read was this novel. I story she made out of her own divorce from her second husband. Only Nora Ephron manages to make a funny story out of that disaster. A husband who leaves his wife for another (married) woman when she is seven months pregnant?!?! What a ... okay, I can't write any of the words I would like to call him on the internet but I think most people will agree and therefore I leave it to your imagination.

But only Nora Ephron would be able to make a comedy out of a tragedy. I had to laugh so much when reading this book even though I still would have loved to kick that husband of hers. The writing makes it extremely life-like, it almost seems like having been written by a woman at the end of her pregnancy without any support at all. But still smart and witty, just like the author.

The novel starts with an introduction where Nora Ephron tells us that her husband was mad at her for having written about it but - as she says - she had written about her life, his life, their life together before, what did he think? That she was all of a sudden taking a vow of silence?

I love Nora Ephron and her stories. I also love Meryl Streep and Jack Nicholson. Why have I never seen this movie? I have no idea but I'm sure it's great and I'm going to look for it.

"Seven months into her pregnancy, Rachel discovers that her husband is in love with another woman. The fact that this woman has a 'neck as long as an arm and a nose as long as a thumb' is no consolation. Food sometimes is, though, since Rachel is a cookery writer, and between trying to win Mark back and wishing him dead, she offers us some of her favourite recipes. HEARTBURN is a roller coaster of love, betrayal, loss and - most satisfyingly - revenge. This is Nora Ephron's (screenwriter of WHEN HARRY MET SALLY and SLEEPLESS IN SEATTLE) roman à clef: 'I always thought during the pain of the marriage that one day it would make a funny book,' she once said - And it is!"
Posted by Marianne at 13:38